For the fourth day in a row, Jewish fanatics continue to storm Al-Aqsa Mosque under heavy police protection 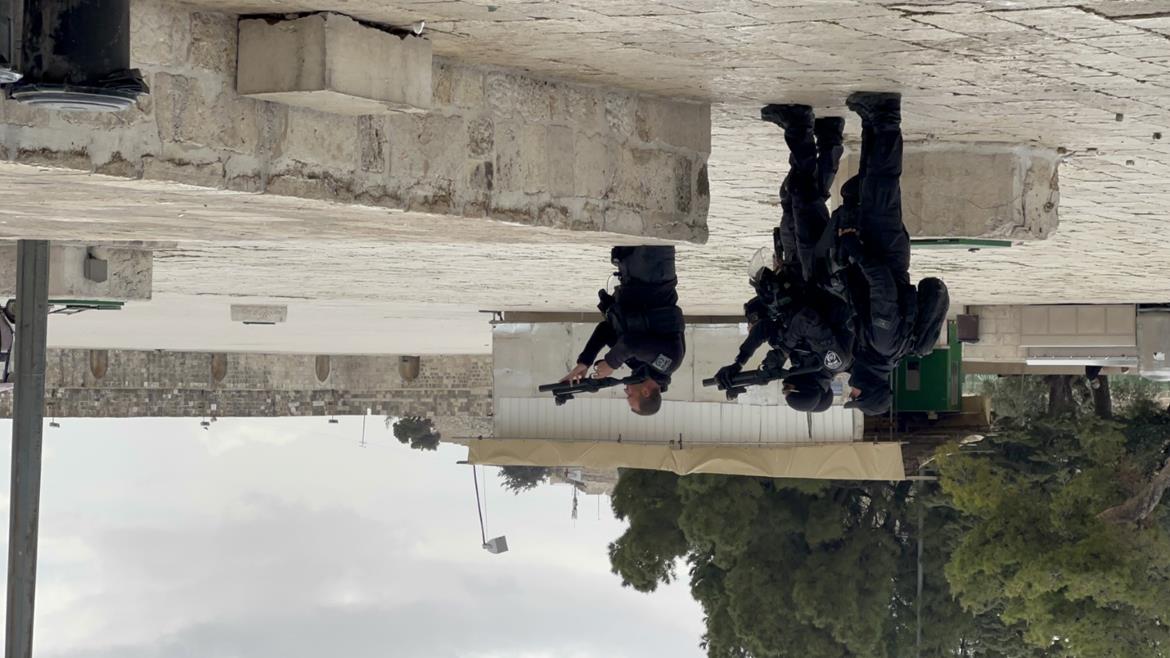 JERUSALEM, Wednesday, April 20, 2022 (WAFA) – For the fourth day in a row, Jewish fanatics continued today to storm Al-Aqsa Mosque, one of Islam’s holiest sites located in Jerusalem’s Old City, amidst rising tension and Arab and international condemnation and warning of an outbreak of uncontrollable violence.

Officials from the Islamic Waqf department, which is in charge of Al-Aqsa Mosque, said over 1100 Jewish fanatics have entered the holy compound during the four hours the police allow them to roam its sacred grounds. Today’s figure was higher than the previous three days.

As in previous days, the Israeli police provided the fanatics heavy protection while forcing Muslim worshippers, who usually on Ramadan days are present in large numbers at the Mosque, to stay inside the buildings or away from the path the fanatics take every day in their intrusion.

In some instances, the police used force to keep the Muslim women at a distance from the fanatics and even forced them to go inside the Dome of the Rock mosque, while forcing the men to stay inside the building of Al-Aqsa Mosque, at times shooting rubber-coated metal bullets at them as well as stun grenades.

Reports said one person was hit by a rubber bullet in the back while inside the mosque. The police fired the bullet into the mosque through one of the broken windows.

In one instance, a stun grenade fired through a window of Al-Aqsa Mosque building started a fire that was quickly put off before causing more damage to the carpeted mosque.

The hardline Jewish fanatics, who seek to change the historic and legal status quo at the walled Al-Aqsa compound as a Muslim-only worship area, have vowed to continue with their provocative presence at the holy site despite the fact that their presence could fuel religious strife.

The Israeli government, yielding to international pressure to de-escalate the situation in Jerusalem, said it will not allow Jews to enter the holy compound after the end of the current Jewish Passover holiday, which ends on Saturday, in order to avoid any contact with the Muslim worshippers who are usually present in the tens of thousands during the last 10 days of the holy fasting month of Ramadan.

It also was deliberating not allowing the fanatics to hold today what is referred to as march of the flags through the occupied Old City and East Jerusalem, also to defuse the situation after warnings by Palestinians that the march could provoke a strong response and could inflame the situation on the ground.

Last year in May, a similar march invited a missile attack from Gaza that led to an outright war between the besieged enclave and Israel that lasted for 11 days and caused hundreds of deaths and injuries among Palestinians and heavy destruction.

Right-wing Israeli organizers of the march of flags have nevertheless vowed to continue in their plans for later today despite objections from the political leadership and the police, who fear it could escalate the situation on the ground.