Malki: Palestinian people have long suffered the injustices and frustrations of double standards 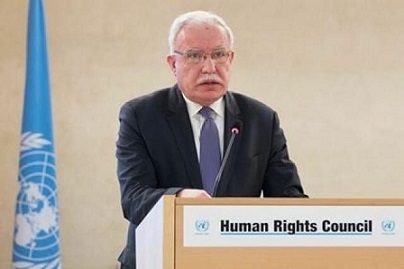 RAMALLAH, Monday, February 28, 2022 (WAFA) - Minister of Foreign Affairs and Expatriates Riyad al-Malki maintained that the Palestinian people have long suffered the injustices and frustrations of double standards, where Israel, the occupying Power, is granted an indefensible status of exceptional treatment that allows it to continue committing crimes with complete and abject impunity.

During a speech Malki delivered at the High-Level Segment of the Forty-Ninth Regular Session of Human Rights Council in Geneva, he emphasized the suffering of hundreds of Palestinian families in Jerusalem and elsewhere in the occupied West Bank who live with the intolerable anxiety of pending dispossession. In Sheikh Jarah and Silwan, Palestinian families are in the midst of the battle of their lives to protect their homes from confiscation or demolition and stop their ongoing Nakba, he noted.

But the reality for millions of victims of egregious human rights violations continues to deteriorate, their right to justice continues to be denied, and the culture of impunity is further entrenched.

This year, I invite all my colleagues to examine and remedy the reason behind this state of affairs, which can be summarized in two words: double standards.

The truth is, respect for international law, including international human rights law and humanitarian law, is ensured selectively, not universally.

In fact, this hall has borne witness to outrageous statements justifying violations of peremptory norms and violations amounting to war crimes and crimes against humanity, many committed against the Palestinian people.

Accountability is sought vociferously when politically expedient and fought against with as much fervor when the culprit is politically favored. This is the bitter fact.

The Palestinian people have long suffered the injustices and frustrations of these double standards, where Israel, the occupying Power, is granted an indefensible status of exceptional treatment that allows it to continue committing crimes with complete and abject impunity.

As we meet for this session, hundreds of Palestinian families in Jerusalem and elsewhere in the occupied West Bank live with the intolerable anxiety of pending dispossession. In Sheikh Jarah and Silwan, Palestinian families are in the midst of the battle of their lives to protect their homes from confiscation or demolition and stop their ongoing Nakba.

Israeli occupation authorities raze Palestinian graves in Jerusalem to make way for a park that serves the expanding colonial settlement regime in the city! A park! Settlers raid the Al-Aqsa Mosque Compound and provoke religious sentiments on the one hand, and carry out lethal raids on Palestinian villages on the other; all while enjoying the physical and legal protection of the state that punishes Palestinians for defending themselves.

Palestinian children and elderly are detained, tormented, and killed by the occupying power that faces zero accountability. Hundreds are held without charge or trial and forced to resort to prolonged and life-threatening hunger strikes to demand their freedom. They quite literally starve for freedom.

Meanwhile, Israel's colonial regime continues to expand at the expense of Palestinian land and rights, while the multi-layered system of persecution and apartheid strips Palestinians of all fundamental rights.

In response, the international community gives the Palestinian people little more than rhetorical statements of concern while shielding their colonizer from accountability for its grave violations. Some states even reward Israel with special status in political, economic, and military deals.

What, other than double standards and exceptionalism, can explain such an upside-down reality?

Double standards alone can explain continued silence about Israel's denial of entry to representatives of the OHCHR as well as all other mandate holders such as Special Rapporteurs and other investigation and fact-finding missions.

But Israel bars and bans UN officials and investigators and gets away with it. Why? Because it wants no witnesses to its crimes; and because despite its utter disdain for the UN and its bodies, it can count on its special treatment by the international community.

International companies profiteer from Israel's colonial regime, invest in illegal settlements and illegally exploit Palestinian natural resources without facing accountability. Why? Because states refuse to carry out their third-party responsibilities under international law when it concerns Israel. Some have even attempted to outlaw the peaceful act of boycott of and divestment from Israeli occupation while employing it against other, more convenient political targets.

In this connection, Palestine calls on the Office of the High Commissioner for Human Rights to respect and fulfill the mandate of resolution 16/36 and update the database of companies involved in illegal activities in Palestine. Refusing to do is inexcusable and political.

Over the years, a plethora of Palestinian, international and Israeli fact-based reports have amassed irrefutable evidence that Israel oversees a colonial occupation regime that practices apartheid and persecution against the Palestinian people. Yet, Israeli exceptionalism is employed to reject the facts in these reports and to silence human rights advocates that refuse to pick and choose when and how international law standards must be applied.

To that end, Israel continues its relentless and cynical assault on Palestinian civil society without so much as reproach. The occupying power has the audacity to outlaw and close prominent human rights organizations and den others entry - knowing full well it will not be questioned or reprimanded.

In fact, some states, including members of this Council (the Netherlands), have appeased this hostile and illegal Israeli action by taking measures against some of the targeted civil society organizations. Some even seek to silence any voice that speaks up against the occupation and disposition of the Palestinian people.

Exceptionalism is also applied by some members that continue to work against the existence of Item 7, emboldening Israel to further entrench its colonial occupation, apartheid, and oppression of the Palestinian people.

In fact, those who make the outlandish claim that this Item, this Council even, "singles out Israel" do not want to answer the most fundamental question of all: After 55 years of occupation, why is Israel still allowed to commit and perpetuate these crimes? Why is there still a need to highlight this critical human rights crisis? Why does the international community insist on appeasing the oppressor and closing all avenues to justice in the face of the oppressed?

We want these egregious Israeli violations to end and for Item 7 to no longer be needed. That hinges on ending double standards and exceptionalism.