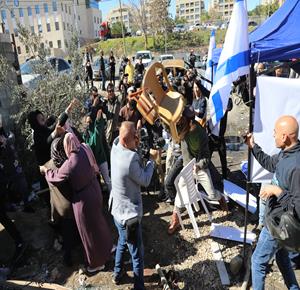 JERUSALEM, Thursday, February 24, 2022 (WAFA) – With the return this afternoon of the racist Israeli member of parliament, Itamar Ben Gvir, and his right-wing supporters to Sheikh Jarrah neighborhood in occupied East Jerusalem, Palestinian residents came out to protest his provocative presence. However, the Israeli police intervened on behalf of the Israelis and attacked the Palestinian residents and their supporters.

WAFA correspondent in Jerusalem said Ben Gvir and a group of hardline supporters set up a tent next to one set up by the residents and their supporters and hoisted an Israeli flag on the tent in order to provoke the residents who in turn hoisted a Palestinian flag.

With the tension rising in the area, Israeli police intervened to back the Israelis and attacked the Palestinians, removing their tent by force and the signs placed in the area.

Tension has been high in the neighborhood for 12 days after an Israeli court has ordered the eviction of the Palestinian Salem family from its home and land in order to hand it over to Jewish settlers.

The eviction order, which was supposed to take place in March, was however frozen two days ago, which pleased the Palestinian residents who still demand canceling it altogether while upsetting Ben Gvir and his settlers, who keep returning to the neighborhood inciting violence and trouble.