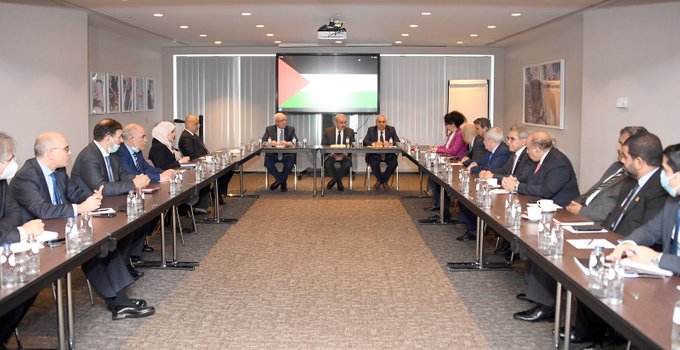 The Prime Minister briefed the diplomatic corps on the latest political developments, Israeli violations against the Palestinian people, and the increasing Israeli colonial settlement expansion, especially in occupied Jerusalem, aiming to obliterate the Palestinian character of the city and isolate it from its periphery.

During the meeting, the Prime Minister highlighted the current challenging economic and financial situation caused by the faltering donor support and a crucial increase in the Israeli deductions of the Palestinian tax revenues.

He reiterated that the Palestinian leadership, headed by President Mahmoud Abbas, is determined to hold elections in all occupied Palestine as a supreme Palestinian interest that would restore the democratic glow to Palestine.

In this context, Premier Shtayyeh called on the international community, particularly the United States and the European Union, to pressure Israel to allow the holding of elections in occupied Jerusalem, as stipulated in signed agreements with Israel.

The Prime Minister called on the Arab diplomats and Ambassadors to collectively act, with the various European Union institutions, in support of the Palestinian cause and save the possibility of achieving the two-state solution.