With the start of the olive season, Palestinians say Israeli settlers steal their crops in lands near settlements 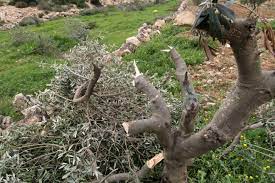 SALFIT, Monday, October 04, 2021 (WAFA) – Palestinians have complained that Israeli settlers have stolen the olive crops from their lands located either behind the apartheid barrier or near the illegal colonies.

Khalil Taqtaq, a landowner from Salfit, in the north of the West Bank, told WAFA today that when a local farmer had a chance yesterday to reach his land near the illegal settlement of Arial, built on usurped Salfit land, he found out that the settlers had stolen the crops from his olive trees.

He said the farmer owns 26 trees on more than 50-dunum plot of land.

The Palestinian Foreign Ministry has warned against settler assault on Palestinian farmers during the olive harvest season, which has just started, and said in a statement that international silence to organized settlers’ terrorism will have serious ramifications on the ground.

“Prior to and during the olive harvest season, attacks by settlers and Jewish terrorists against Palestinians escalate, sometimes by preventing them from reaching their land to harvest olives, others through attacks and assaults on Palestinian citizens participating in the harvest, and sometimes by burning, destroying and chopping hundreds of olive trees in many areas of the occupied West Bank or stealing olive crops, as happens every year,” said the Foreign Ministry.

The olive harvest season is considered one of the most important seasons in Palestine as thousands of farmers depend on this harvest for their livelihood.