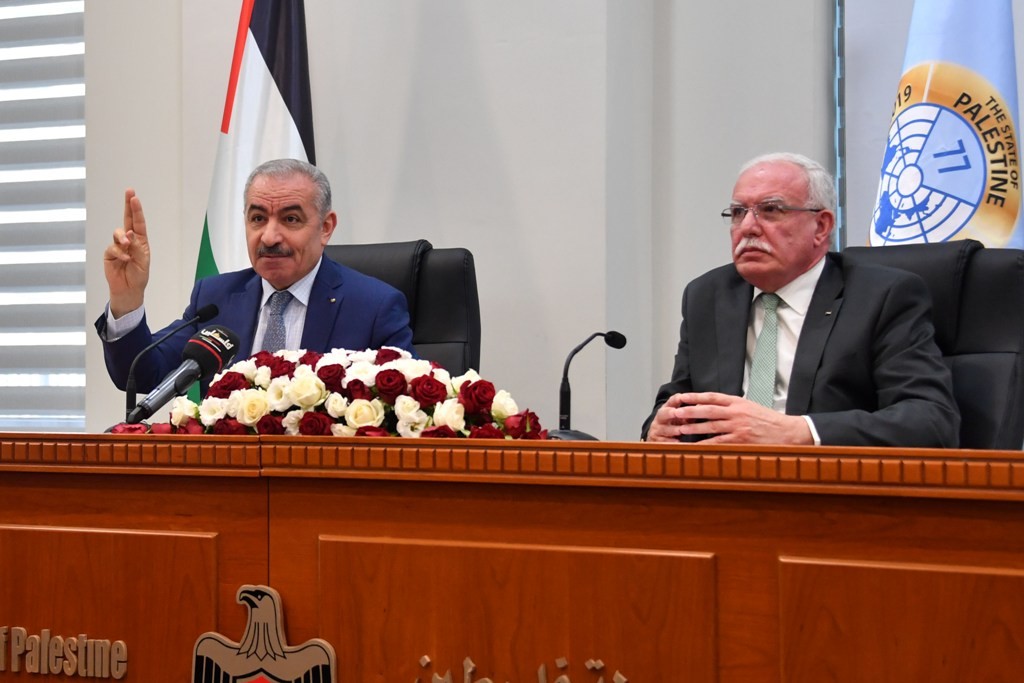 RAMALLAH, Friday, February 05, 2021 (WAFA) – Prime Minister Mohammad Shtayyeh and Minister of Foreign Affairs Riyad al-Malki have strongly welcomed the decision of the Pre-Trial Chamber I of the International Criminal Court that the Court's territorial jurisdiction in the Situation in Palestine extends to the territories occupied by Israel since 1967, namely Gaza and the West Bank, including East Jerusalem.

Shtayyeh described the resolution as a victory for justice, humanity and freedom, as well as a redress to the victims of the Israeli war crimes and their families, the latest of whom was Palestinian martyr Khaled Nofal, who was shot dead early today morning by Israeli settlers.

"The resolution is a message to the perpetrators of crimes, that their crimes will not be subject to a statute of limitations, and that they will not go unpunished," said Shtayyeh, who described the resolution as a victory for the ICC itself which has thwarted Israel's attempts to politicalize its deliberations.

The Prime Minister called on the Court to speed up its judicial procedures in the files brought before it, which include the crimes committed by Israel during its three wars on the Gaza Strip, in addition to the issues of the Palestinian prisoners in Israeli detention and the settlement file.

Foreign Minister Riyad al-Malki also commended the resolution, saying it "opens the door to the pursuit of criminal accountability for the most egregious crimes under the Court's mandate, which have been and continue to be committed against the Palestinian people."

"The Honorable Judges of the Pre-Trial Chamber have displayed respect to their mandate and independence, commitment to the values and principles of criminal accountability as embodied in the Rome Statute, and courage, impervious to unprecedented acts of outright hostility and intimidation," al-Malki added.

The Foreign Minister reaffirmed his unwavering commitment to working with all States Parties to the Rome Statue on protecting and defending the integrity and independence of the Court from all attempts at exerting influence.

He also expressed readiness to cooperate with and extend all assistance to the Prosecutor and the Court during the investigation of Israeli war crimes.

"This is a historic day for the principle of criminal accountability. The investigation that the Decision has now facilitated sends a clear message to perpetrators of heinous crimes and their accomplices that they are not out of reach, and that their crimes will not go unpunished."