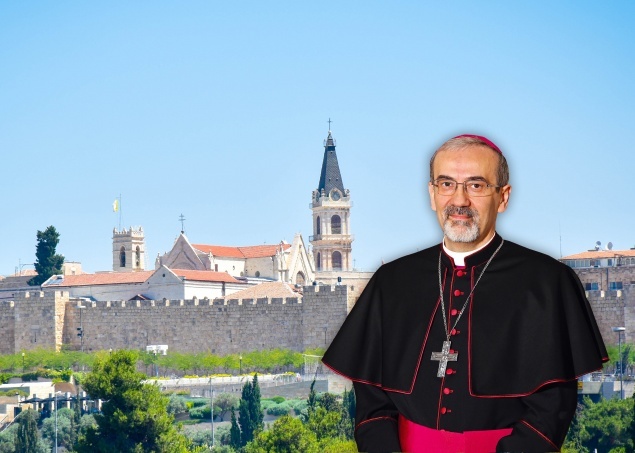 JERUSALEM, Saturday, October 24, 2020 (WAFA) - Pope Francis has announced the appointment of Archbishop Pierbattista Pizzaballa as the Latin Patriarch in Jerusalem after his service as Apostolic Administrator for a period of four years, today said a statement from the Latin Patriarchate of Jerusalem.

“With feelings of joy and gratitude, the family of the Latin Patriarchate in Jerusalem, Amman, Nazareth and Cyprus, in particular the bishops, patriarchal vicars, priests, deacons, seminarians, religious men and women, consecrated men and women, the People of God in all the parishes as well as the workers in the diocesan institutions, congratulate the new Patriarch wishing His Beatitude success in carrying out his exceptional responsibilities, especially in these unusual circumstances. May His Beatitude be granted good health and divine blessing to continue serving our Local Church, while promoting peace, justice and reconciliation,” said the statement.

Archbishop Pierbattista Pizzaballa was born in Cologno al Serio (Bergamo), Italy on 21 April 1965. He entered the Franciscan Order in September 1984, made Solemn Profession on October 10, 1989, and was ordained Priest on September 15, 1990. In October 1990, he was transferred to the Holy Land and subsequently entered the service of the Custody of the Holy Land. He obtained a Licentiate in Biblical Theology at the Studium Biblicum Franciscanum in Jerusalem.

He lectured Hebrew at the Studium Biblicum Franciscanum, was Vicar of the Latin Patriarch of Jerusalem for the pastoral care of Hebrew-speaking Catholics in Israel and in 1995 was responsible for the publication of the Roman Missal in Hebrew, and translated various liturgical texts in Hebrew for the Catholic Communities in Israel. Archbishop Pizzaballa speaks Italian, Modern Hebrew and English.

He served as Custos of the Holy Land from 2004 to 2016. He is a member of the Congregation for Oriental Churches and has been a Consultor in the Commission for Relations with Judaism for the Pontifical Council for the Promotion of Unity among Christians.