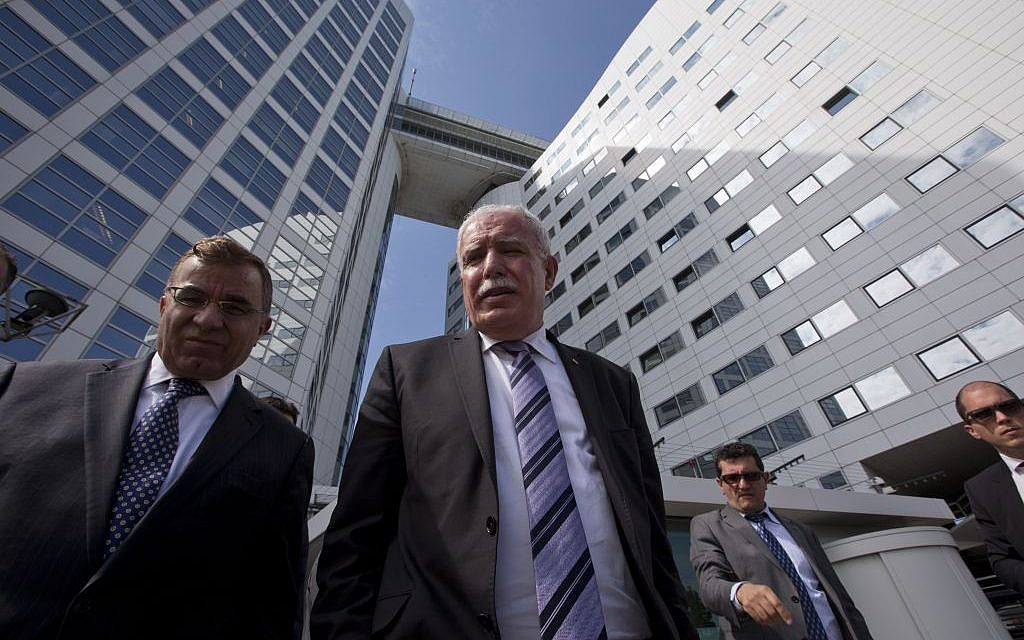 Foreign Minister Riyad al-Maliki, center, outside the headquarters of the ICC, June 25, 2015.

RAMALLAH, Sunday, July 19, 2020 (WAFA) – Minister of Foreign Affairs and Expatriates Riyad al-Maliki said today that the International Criminal court (ICC) is likely to make a decision at any time on opening an inquiry into war crimes committed by the Israeli occupation against the Palestinians.

"The occupation's leaders should be afraid of this [investigation]," al-Maliki said during an interview with official Palestine TV, adding that Israeli leaders were gravely concerned over a potential inquiry by the ICC into war crimes committed in the occupied Palestinian Territory.

He continued, "The Israeli government is concerned about such a decision by the ICC. Indeed, Netanyahu expressed his concern about this when he postponed the demolition of Khan al-Ahmar. At that time, he attributed it to his concern about any step that the ICC might take."

"This is a worrying issue for the Israeli side. In the event that the ICC decides to open a formal investigation, this means that Israeli officials, headed by [Benjamin] Netanyahu, who were responsible for crimes against our people will be on the list of defendants that the ICC will prosecute," al-Maliki remarked.

Al-Maliki pointed out that when the ICC Chief Prosecutor decided on January 22 to ask the Pre-Trial Chamber I about the geographical or judicial jurisdiction, the former had known that she has that mandate when President Mahmoud Abbas sent her a letter in December 2014. Yet, he said, the ICC Chief Prosecutor asked us, the Israelis and several countries to present pleadings. He said at that time, some countries submitted pleadings in favor of the Palestinian side while other countries in favor of the Israeli one.

He said that, according to the ICC procedures guide, after 120 days have passed the judges shall make their decisions on the matter. Al-Maliki said that this was supposed to take place in the middle of last June, but that when the judges heard the decision of President Mahmoud Abbas on May 19 regarding the abolition of the obligations and agreements with the Israeli government, they requested clarification from us and from the Israeli side, and the Palestinians submitted it on June 5.

"The [ICC] Chief Prosecutor submitted her clarification on June 7, and confirmed that what the President said does not abolish that geographical jurisdiction, given that our abolition of the agreements with Israel came as a result of the Israeli annexation plan which violates international law," al-Maliki stated.

He pointed out that Israel was given a deadline until June 24 to present its pleadings but failed to do so, and therefore the decision of the Pre-Trial Chamber was delayed.

Al-Maliki dismissed the Israeli narrative that we have wait three weeks until the end of the ICC's annual leave, saying the Chief Prosecutor and the judges are on duty during this period and that the judges can make their decisions at any moment.

Al-Maliki said he expects that Israel will obstruct the work of the ICC if it decides to open a formal investigation, as it previously did when it banned the work of individuals from several human rights organizations.

He said if the investigation begins, the ICC will start with the settlement file, which is the most obvious and direct issue because only one party is involved, which is the Israeli side.