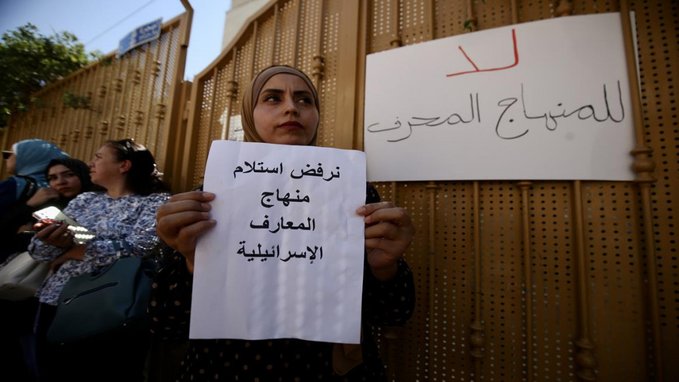 JERUSALEM, Sunday, September 18, 2022 (WAFA) – The Palestinian schools in occupied East Jerusalem are scheduled to go on a one-day strike tomorrow, Monday, in protest of the Israeli occupation’s attempts to impose its distorted textbooks in the city’s Palestinian schools.

PNIF called on international institutions to stand up to their responsibilities and press the Israeli occupation and its executive bodies not to interfere in the affairs of the Palestinian schools in occupied Jerusalem.

Yesterday, Palestinian parents and students held protests in several neighborhoods of the city against attempts by the Israeli occupation authorities to prevent the school from teaching the official Palestinian textbooks and rather use the distorted Israeli-issued textbooks.

The protesters chanted slogans such as ‘no to the distorted curriculum,’ ‘no to Israelizing education’, and ‘we reject the curriculum of the Israeli Ministry of Education’.

They also chanted slogans decrying Israel’s disregard for the rights of the Palestinian students in occupied Jerusalem and the negligence of Palestinian schools, including Israel’s failure to provide maintenance to school buildings, as well as to build more school rooms to accommodate the natural population growth.

Earlier this month, the Parents Committee, a body representing parents of Palestinian schoolchildren in occupied Jerusalem, said the Israeli authorities printed new textbooks similar to the ones provided by the Palestinian Ministry of Education but with alterations and omission of many facts, such as the Palestinian flag, national symbols, and other terms and historical facts, and replaced them with others in a way intended to deny the Palestinian students in occupied East Jerusalem the right to learn about their history, culture and the history of their city, Jerusalem, and country, Palestine.

The purpose behind this, said the Committee at the time, is to abolish the students’ Palestinian identity and sense of being a Palestinian Arab, in addition to falsifying and distorting the facts about Jerusalem in particular and Palestine in general.

The Israeli authorities have sent letters to Palestinian schools in East Jerusalem warning them that continuing to use the Palestinian textbooks in their original copy will lead to the suspension of their teaching license prompting some to alter their education plans and turn to the Israeli curriculum, while others decided to resist the Israeli plans.