Israel’s Supreme Court bans Gaza residents from any redress and remedy in Israel, gives immunity to the state 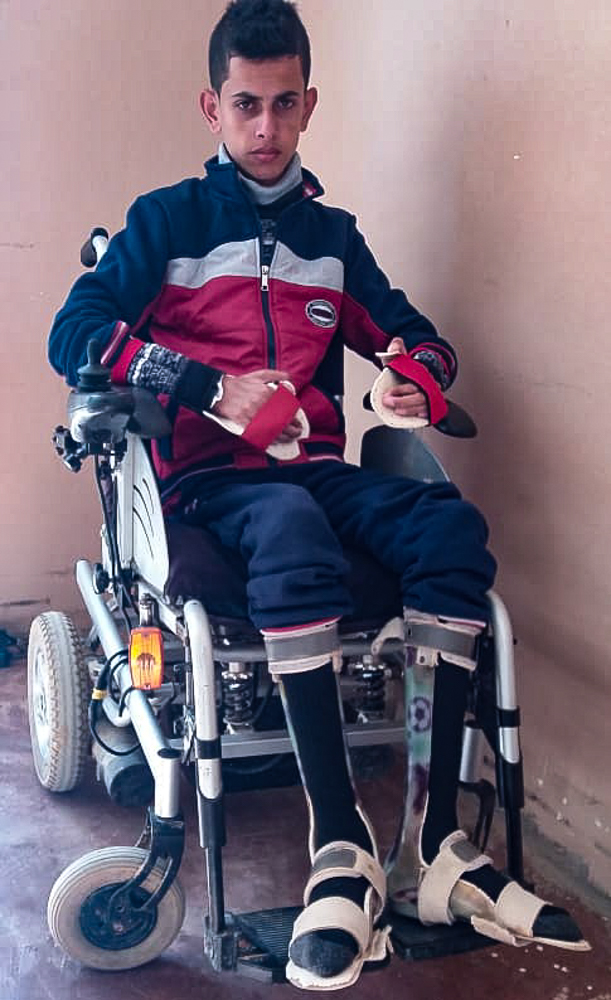 15-year-old Palestinian Attiya Nabaheen shot by Israeli soldiers while on his family property in Gaza in November 2014 and became quadriplegic. (Al-Mezan photo)

JERUSALEM, Thursday, July 7, 2022 (WAFA) – A three-justice panel of the Israeli Supreme Court two days ago rejected an appeal demanding that the State of Israel pay tort compensation damages for the Israeli military’s shooting and serious injury of 15-year-old Palestinian Attiya Nabaheen in November 2014, according to a press release by Adalah – The Legal Center for Arab Minority Rights in Israel.

Nabaheen was shot on his family's property near al-Bureij, 500 meters from the fence between Israel and Gaza, and as a result of the shooting, Nabaheen was left a quadriplegic confined to a wheelchair.

Adalah and the Gaza-based al Mezan Center for Human Rights, on behalf of the boy and his family, appealed to the Supreme Court the 2018 judgment of the Beer Sheba District Court finding that the State of Israel is not liable for damages.

At issue in the case was the constitutionality of Amendment No. 8 of Israel's Civil Wrongs Law (State Responsibility) of 1952, which was enacted in 2012. This law prescribes that the residents of a territory declared by the Israeli government as “enemy territory” - as Gaza was declared in 2007 - are not eligible for compensation from Israel. In the appeal, Adalah and al Mezan argued that the lower court’s decision and the law violate both Israeli and international law, which require that protected civilians be entitled to effective legal remedies, especially when the injury resulted from actions not related to “acts to war”.

The Court acknowledged that the law infringes on Palestinian victims’ fundamental rights, namely the right to life, bodily integrity, dignity, liberty, property and the right of effective legal remedy. However, it ruled that the level of protection of fundamental rights afforded to Nabaheen is limited due to his residence in Gaza – an “enemy territory”.

The Court further determined that the law serves an appropriate purpose: “the prevention of economic or moral assistance to the enemy”. According to the Court, this rationale justifies the sweeping infringement of the fundamental rights of Palestinian civilians injured by Israel’s armed forces.

Adalah and Al-Mezan responded to the ruling: “The Israeli Supreme Court's decision violates international humanitarian law, and justifies the immediate initiation of an International Criminal Court investigation, as it deprives Palestinian civilian victims of war crimes committed by Israel of any legal remedy, even remedies under civil law. The Court’s justification for the denial of compensation to an innocent boy, confined to a wheelchair for life because of Israel’s unlawful assault, is the ‘prevention of economic and moral assistance to the enemy’ is an unprecedented, moral low for the Court. This decision not only grants sweeping immunity to the Israeli military to injure Palestinians wherever they are, but also determines, in a radical move, that the deliberate denial of compensation is an appropriate tool for harming the enemy. There is no clearer evidence of the fact that the Israeli legal system is committed to the legitimization of war crimes and to assisting the military in its efforts, by denying all legal remedies to victims, especially when, at the same time, the Court refuses to intervene in the state’s closure of criminal investigations into alleged war crimes and thus also providing impunity for criminal actions committed by the Israeli military."

International bodies have recognized the importance of this case. In its report of March 2019, the independent UN International Commission of Inquiry into the 2018 protests in the Occupied Palestinian Territory concluded in regard to this case that: “The [District] Court ruling and the law on which it is based, excludes Gazan residents from eligibility for compensation under the law, without examining the harm itself. In doing so, Gazan victims of violations are denied the main avenue to fulfill their right to ‘effective legal remedy’ from Israel that is guaranteed to them under international law (…) The importance of this ruling is thus difficult to overstate.”

The Supreme Court’s ruling in Nabaheen also contradicts established legal precedent of the Court, said Adalah. Following a petition by Adalah, the Supreme Court decided in a unanimous ruling delivered by nine justices in 2006, that the State of Israel cannot exempt itself from paying compensation to Palestinians in the West Bank who have been harmed by the Israeli military, invalidating a provision of a recent amendment to the Civil Wrongs (Liability of the State) Law.

Adalah and al Mezan will file a request for a second hearing to the Supreme Court.