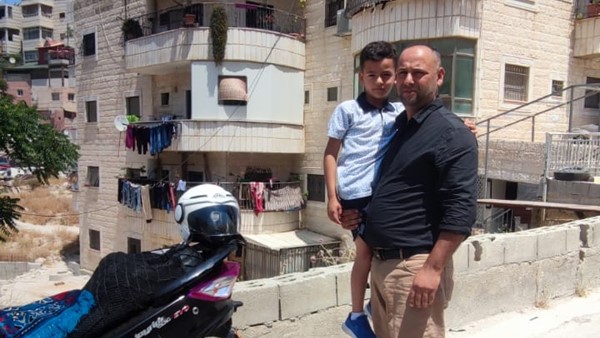 Residents of the building in Wadi Qaddum. (Photo by OCHA)

JERUSALEM, Monday, June 6, 2022 (WAFA) – The United Nations Office for the Coordination of Humanitarian Affairs (OCHA) in the occupied Palestinian territory warned that an imminent Israeli demolition of a Palestinian-owned building in occupied East Jerusalem may leave 74 Palestinians homeless.

A building of 12 housing units is at imminent threat of demolition in Wadi Qaddum area of Silwan neighborhood, in East Jerusalem, said OCHA. Recently, the Palestinian families received a demolition order from the Israeli municipality and were called to evacuate the building within days.

If the demolition goes ahead, 32 adults and 42 children will be forcibly evicted. Two of the households in the building are Palestine refugees, and another two would be displaced for the second time in two years, following previous demolitions.

As with most demolitions in the occupied Palestinian territory, including East Jerusalem, the pretext for the possible demolition in Wadi Qaddum is the lack of an Israeli building permit; however, such permits are virtually impossible for Palestinians to obtain, stressed OCHA. The site on which the building is located has been designated by the Israeli authorities as an open/green space, to be used as a public garden.

At this stage, primary efforts aim to prevent the demolition through engagement with relevant authorities. The humanitarian community stands ready to support those displaced if the demolition goes ahead, explained the UN agency.

Since the beginning of 2022, 300 structures have been demolished or seized across the West Bank, including East Jerusalem.

(Figures on demolitions over the years are available here.)