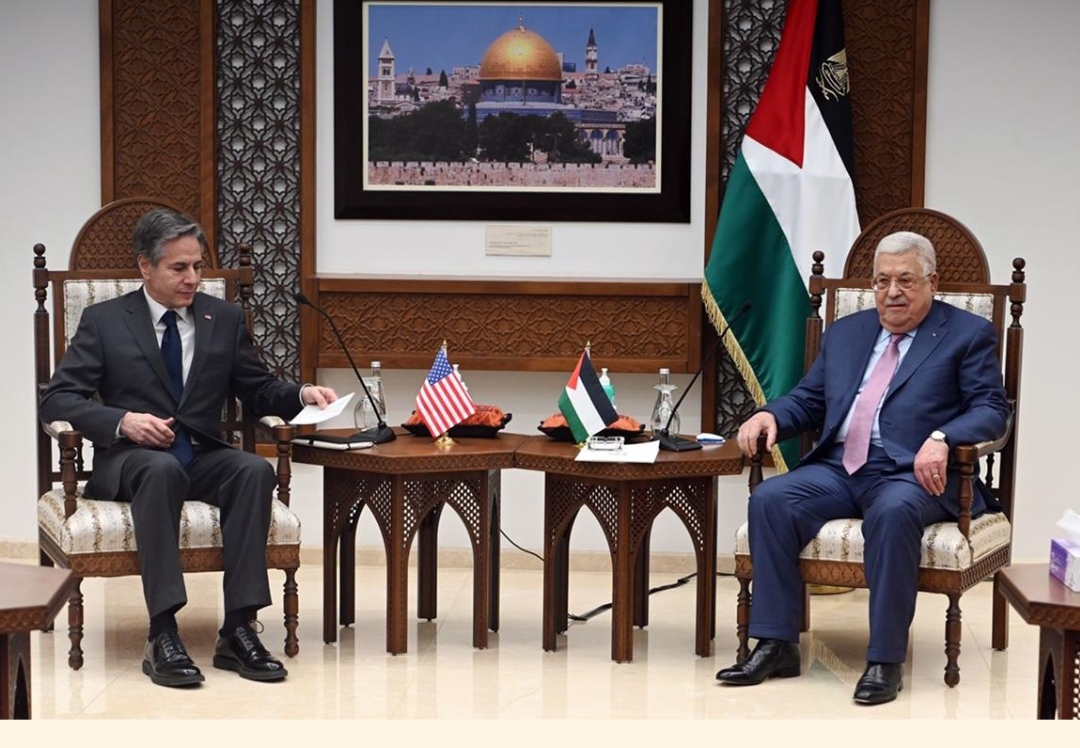 RAMALLAH, Sunday, March 27, 2022 (WAFA) - President of the State of Palestine Mahmoud Abbas affirmed today his commitment to the international peace references, as he received US Secretary of State Anthony Blinken at the presidential headquarters in Ramallah.

During the meeting, the President stressed that the priority should always be a political solution that ends the Israeli occupation of the land of the State of Palestine on the pre-1967 borders, with East Jerusalem as its capital, and with a fair resolution of all permanent status issues, including the refugee issue, under the auspices of the International Quartet and in accordance with international legitimacy resolutions.

The President said, "I am pleased to welcome US Secretary of State Anthony Blinken on his visit to Palestine. This is an opportunity to brief him on the latest developments. I also thank the US administration for the support it has provided to the Palestinian people, especially to UNRWA."

He stressed the State of Palestine's commitment to international law and signed agreements, to peaceful popular resistance, and to joint work with the global community, including the United States, in combating terrorism in our region and the world.

He continued: "We stress the importance of implementing what President Biden's administration believes in, including its commitment to the two-state solution, ending settlement construction and settler violence, preserving the historical situation in Al-Aqsa Mosque, preventing unilateral actions, reopening the US Consulate in Jerusalem and abolishing US laws that consider the Palestine Liberation Organization (PLO) as a terrorist organization.

The President continued, "The current events in Europe have shown flagrant double standards, despite the crimes of the Israeli occupation that amount to ethnic cleansing and racial discrimination, as recognized by human rights organizations. Israel, which acts as a state above the law, has never been held to account, and its unilateral measures will soon push us into implementing the decisions of the Palestinian Central Council [of ending security coordination with Israel…].

"What is happening in Palestine cannot be tolerated. International law cannot be divided, and we wonder whether the domination of the Israeli occupation authorities over the Palestinian people and the violation of their legitimate rights, can continue without taking measures that lead to the end of this occupation," added President Abbas.

Meantime, the President congratulated our Palestinian people on the success of the local elections that took place yesterday in a democratic atmosphere, saying: “We had hoped that these elections would take place in the Gaza Strip, where the election was blocked by the Hamas authorities, despite the group's participation in the election in the West Bank. We express our deep regret over Israel’s continued prevention of the Palestinian presidential and legislative elections in East Jerusalem."

On the other side, US Secretary of State Anthony Blinken affirmed the administration's commitment to achieve a two-state solution of Palestine and Israel living side by side in peace and security.