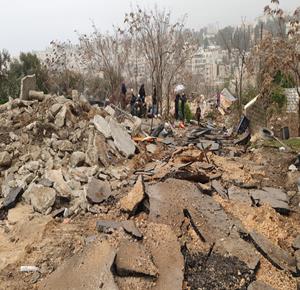 Remains of the Salhia family home after its demolition.

They were reacting to the demolition earlier today of the Salhia family home in Sheikh Jarrah neighborhood of East Jerusalem that displaced 13 people, mainly children.

“This crime is part of (Israeli) policies of persecution, racism and ethnic cleansing against indigenous landowners in favor of settlers,” said PM Shtayyeh in a statement, calling on the United Nations to intervene to put a stop to such policies.

The Palestinian Ministry of Foreign Affairs and Expatriates also condemned the demolition in a statement describing it as ethnic cleansing with a goal to force the Palestinian residents of the city to leave it in order to create a Jewish majority.

The Arab League, in a statement by its Palestine affairs representative Said Abu Ali, said what happened in Sheikh Jarrah is “a war crime and ethnic cleansing.”

He said this policy aims at forcing the Palestinians to leave their homeland by making it difficult for them to live there.