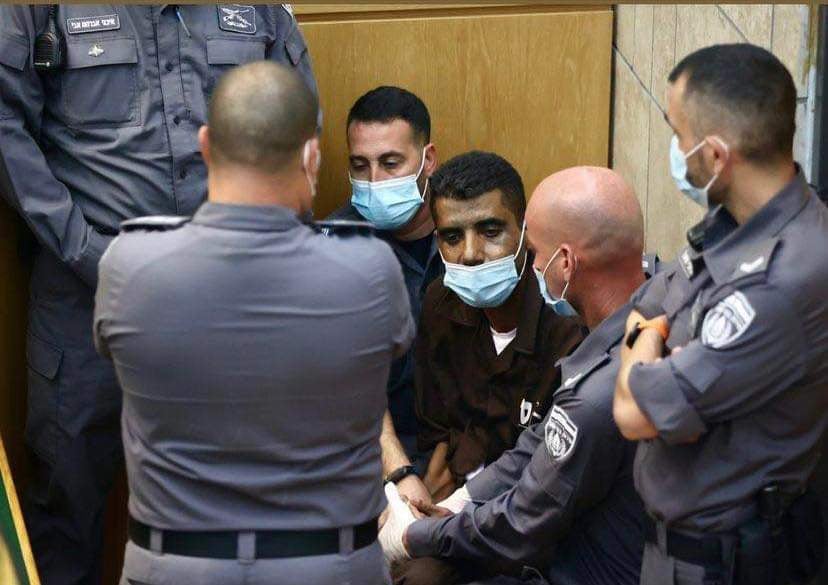 Zakaria Zubaidi, 46, one of the four recaptured Palestinian freedom fighters, appears before an Israeli court in Nazareth, 11 Sept 2021.

JENIN, Sunday, September 12, 2021 (WAFA) – An Israeli court last night remanded for nine days the four Palestinian freedom fighters who had been rearrested by the Israeli occupation forces after they broke out of the Israeli Gilboa Prison on Sunday-Monday night, the Palestinian Authority’s Detainees Affairs Commission has said.

The four freedom fighters, along with another two who are still at large, are believed to have dug a hole in the floor of their cell over several months. It led to a cavity underneath the prison created when piles were sunk into the ground during its construction.

The four prisoners are Zakaria Zubeidi, 46, a former Fatah leader in the northern West Bank city of Jenin, as well as Yaqoub Yaqoub Mahmoud Qadri, 49, Mohammad Qasem Arda, 39, and Mahmoud Abdullah Ardah, 46, the latter three of whom are already serving life sentences.

Yesterday, thousands of Palestinians held protests across the occupied West Bank in support of the six Palestinian freedom fighters, especially the four who were recaptured, amid fears of an Israeli retaliation that has already ushered in the repression of hundreds of Palestinian political prisoners in Israeli detention.

Since last week, over 4,500 Palestinian political prisoners in Israeli prisons have been facing an Israeli repressive campaign following the escape of the six Palestinian freedom fighters from Gilboa prison.

In response to the Israeli crackdown, the prisoners set fire to detention cells inside the Israeli prisons of Ofer and Kzi’ot in protest against the Israel Prison Service’s repressive measures, which included sending many prisoners to solitary confinement and restricting prisoners’ access to essential services.