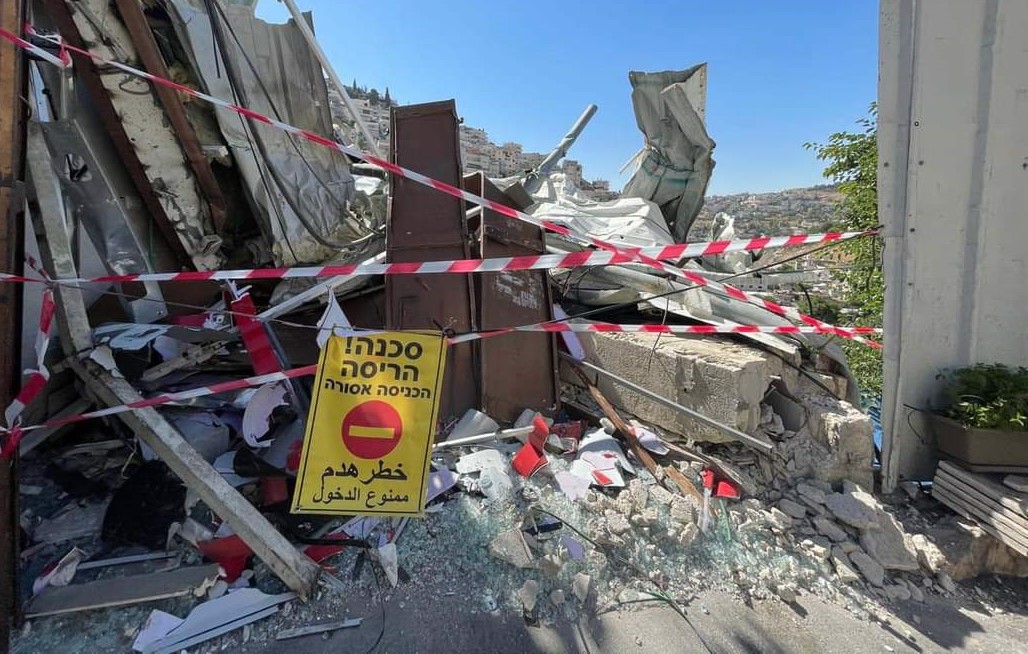 Remains of the butchery demolished in al-Bustan area in the East Jerusalem neighborhood of Silwan.

JERUSALEM, Tuesday, June 29, 2021 (WAFA) – In a move Palestinians feared was the start of mass demolition of homes, Israeli police today raided the East Jerusalem neighborhood of Silwan and tore down a shop in al-Bustan area, one of 17 structures, mainly homes, in that area slated for demolition by the Israeli municipality of West Jerusalem, according to WAFA correspondent.

He said that Israeli police and border guards, accompanying a bulldozer, cordoned al-Bustan area as the bulldozer tore down a butchery owned by Nidal Rajabi, a local resident, who refused to self-demolish it in line with a demolition notice.

The demolition was carried out two days after the end of the Israeli municipality deadline for 13 Palestinian families to self-demolish their 17 homes in the neighborhood under the pretext they were built without a permit.

WAFA correspondent said the demolition of the shop will facilitate access to the homes slated for demolition.

Rajabi and other residents confronted the Israeli forces to prevent the demolition and were brutally attacked by the police hitting some with rubber-coated steel bullet, one of them was transferred to hospital, and causing others to suffocate from tear gas, according to the Palestinian Red Crescent.

Three Palestinians were also detained, including the shop owner and his son.

Meanwhile, Fatah Central Committee member Hussein al-Sheikh called on the international community to immediately intervene to stop the home demolitions in Silwan and forcible expulsion of its Palestinian residents.

"Al-Bustan neighborhood is being attacked by the occupation through demolition, destruction and displacement, and we call on the international community to intervene immediately to stop this massacre against the residents of Jerusalem and their homes and properties," al-Sheikh tweeted.

Using the pretext of illegal building, Israel demolishes houses on a regular basis to restrict Palestinian expansion in occupied Jerusalem while denying them building permits in their neighborhoods.

Although Palestinians in East Jerusalem, a part of the internationally recognized Palestinian territory that has been subject to Israeli military occupation since 1967, they are denied their citizenship rights and are instead classified only as "residents", which can be revoked for any reason.

They are also discriminated against in all aspects of life including housing, employment and services, and are separated from the West Bank by Israel's separation wall.