Thousands of Brazilians rally in several cities in solidarity with Palestine 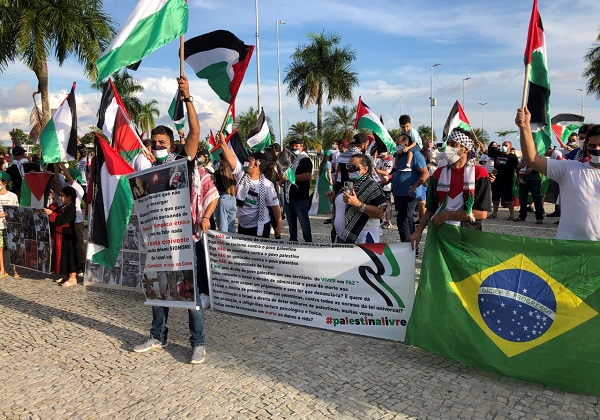 SÃO PAULO, Tuesday, May 18, 2021 (WAFA) – Thousands of Brazilians took to the streets in several Brazilian cities in solidarity with the Palestinian people.

The Brazil Arab News Agency (ANBA) reported that Brazilians held a series of demonstrations across their country in condemnation of the Israeli onslaught on Gaza and to show empathy with Palestine on the occasion of the 73rd anniversary of the Nakba.

The protestors had motorcades in São Paulo, Manaus and Recife, and held rallies in Brasília, Porto Alegre and Curitiba on Saturday, May 15. Rio de Janeiro took to the streets on Thursday, May 13.

Dozens of cars participated in a demonstration in the city of São Paulo, drawing attention to the Palestinian situation, shouting slogans, and waving flags.

In Chile, the country with the largest Palestinian community outside the Middle East, peaceful protestors gathered with Palestinian flags at the Dignity Square in Santiago.

In Mexico, participants rallied in solidarity with Palestine at the Monumento a la Revolución at the Republic Square in Mexico City. Dozens gathered at the place with banners in support of Palestinians and speeches that marked their stance regarding the current situation and commemorating Nakba.