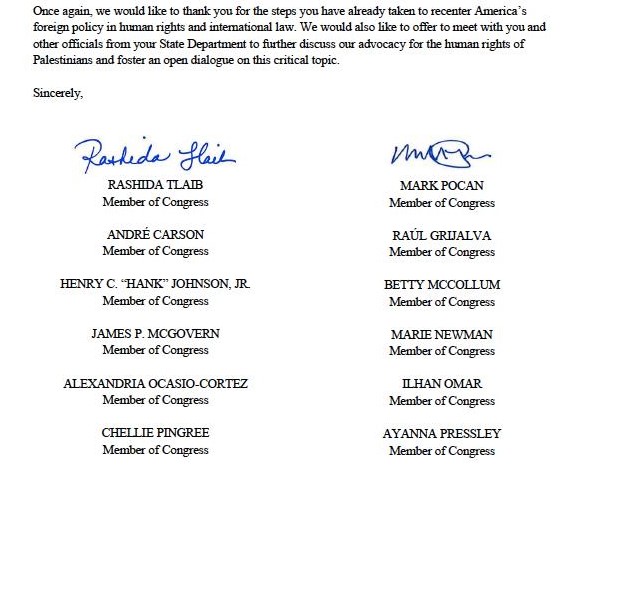 The US lawmakers who signed the letter on Palestinian rights to US Secretary of State Antony Blinken.

WASHINGTON, Saturday, March 13, 2021 (WAFA) – Twelve members of the US Congress yesterday called on the administration of President Joe Biden to oppose Israeli annexation of occupied Palestinian lands, to condemn Israeli demolition of Palestinian homes, and to officially rescind his predecessor’s Peace to Prosperity plan.

In a letter to US Secretary of State Antony Blinken, the members of Congress, led by Rashida Tlaib and Mark Pocan and who identified themselves as "advocates for the human rights of the Palestinian people", called on the Biden Administration to ground its engagement on Palestine and Israel in international law and human rights and undo the damage done by the former administration under Donald Trump.

"We remain concerned about Israel’s policy of demolishing Palestinian homes in the occupied West Bank, including East Jerusalem," said the letter, while calling for an investigation into the use of US equipment in the demolitions and if this violates US law.

"We believe the State Department should condemn Israel’s home demolitions in unequivocal terms and take effective and timely diplomatic action to end this policy."

The letter also said that while they were "greatly heartened that the Biden Administration is opposed to Israeli annexation; however, Israel’s ongoing colonization of the Palestinian West Bank, including East Jerusalem, alongside its demolition of Palestinian homes, is a form of going, de facto annexation which needs to be unequivocally opposed by the United States. The message from this Administration must be clear: settler colonialism in any form – including Israel’s settlements in East Jerusalem and the West Bank – is illegal under international law and will not be tolerated."

They also said that "the State Department should publically call on Israel to fulfill its legal obligations to provide vaccines to all Palestinians living under Israeli military occupation."