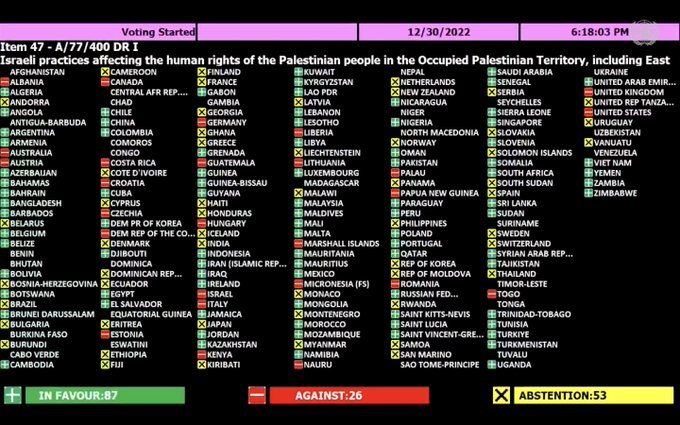 NEW YORK, Saturday, December 31, 2022 (WAFA) - The United Nations General Assembly passed a resolution early this morning calling on the International Court of Justice (ICJ) to give an advisory opinion on the consequences of the Israeli occupation of the Palestinian territories.

The General Assembly voted 87 in favor to 26 opposed, with 53 countries abstaining.

Speaking at the end of the vote, Palestine's Permanent Observer to the UN, Riyad Mansour, thanked the countries that supported the resolution, which included all the Arab and Islamic countries, Russia and China.

“With that vote, the United Nations had requested an advisory opinion from the International Court of Justice on the violation of the Palestinian people's right to self-determination, occupation, settlement, and annexation, which came one day after the formation of the Israeli government, whose top on its agenda is settlement expansion,” said Mansour.

“We are confident that you will support the Court's advisory opinion when it is issued if you believe in international legitimacy and international law,” he added.

Israel, the United States, the United Kingdom and Germany were among the 26 who voted against the resolution. France was among the nations that abstained.