While restricting freedom of worship for Muslims at their holy site, Israel facilitates entry of Jewish extremists 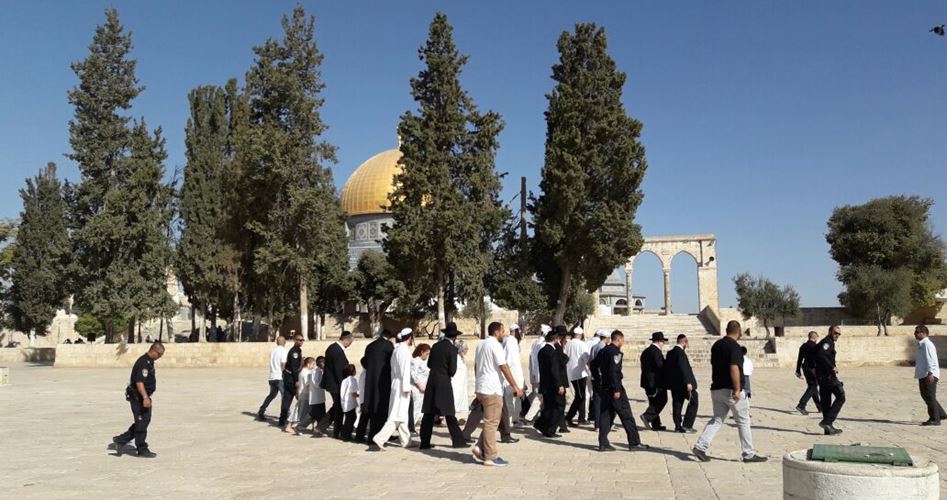 JERUSALEM, Monday, December 19, 2022 (WAFA) – The Israeli occupation forces this morning restricted entry of Palestinian Muslims into the Al-Aqsa Mosque compound in occupied Jerusalem to freely perform their regular worship duties, the door to the Muslim holy compound was widely opened for the entry of Jewish extremists, according to officials from the Islamic Waqf department, which is in charge of the affairs of the Muslim holy places in occupied East Jerusalem.

They said that Israeli police, who man the gates of the walled compound, prevented hundreds of Palestinian Muslims seeking to hold the daily dawn prayers from entering their holy place since the early morning hours, forcing many to perform the prayers in the open space outside the compound.

At the same time, the police facilitated the entry of dozens of Jewish fanatics marking the Hanukkah, or lights, holiday, into the Muslim holy site since the morning hours, provoking the feelings of the Muslims who were denied freedom of worship at their mosque.

Waqf officials said some of the fanatics, who roamed the holy site under heavy police protection, even performed Jewish rituals in violation of the decades-long status quo that bans any religious performance inside the walled compound to anyone other than Muslims.

Jewish fanatic groups have called on their followers to flock to the Al-Aqsa Mosque compound during the week-long holiday and light candles within its yards in defiance of the ban.

Palestinian and Muslim officials have warned against allowing the fanatics to change the status quo and called on Muslims to be present in large numbers at the holy place all the time in order to protect it.

The Jewish fanatics hope their new right-wing government, which includes some of their leaders, will change the status quo and divide the Muslim holy site so that Jews can pray within it compound as well. Some even call for destroying the mosques in the compound, mainly the golden Dome of the Rock and Al-Aqsa Mosque, and replacing them with Jewish temples.