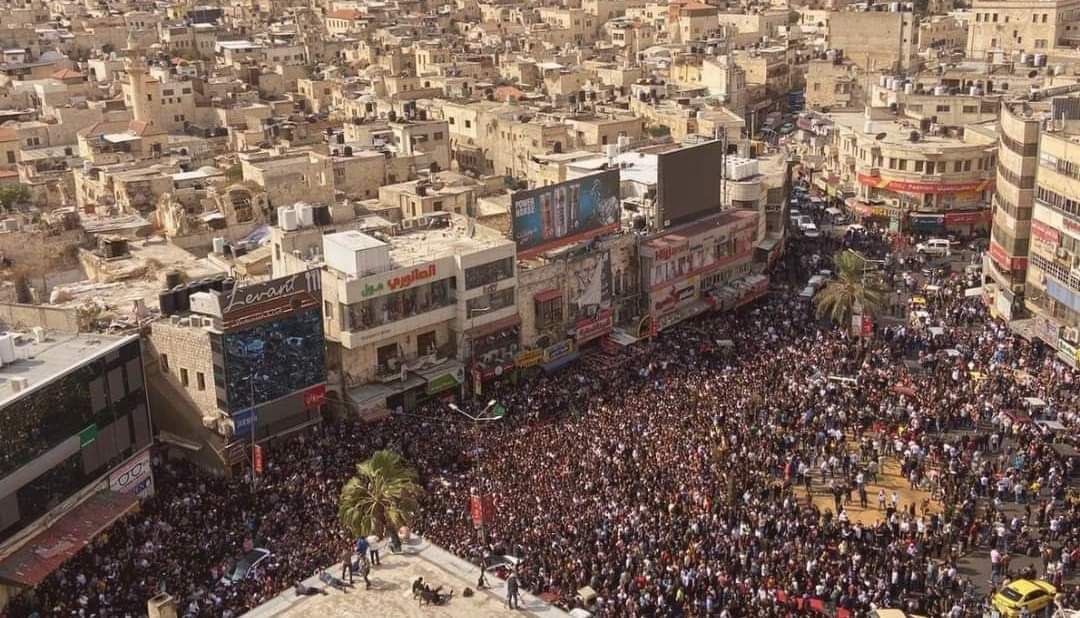 Mourners in the funeral of the five killed in Nablus by Israeli soldiers.

NABLUS, Tuesday, October 25, 2022 (WAFA) – Tens of thousands of Palestinians took part today in the funeral of five Palestinians killed earlier in the morning by Israeli soldiers during an army assault into the northern West Bank city of Nablus.

The mourners carried the Palestinian flag and black banners while denouncing the Israeli aggression and killings.

Wadi al-Houh, 31, Hamdi Sharaf, 35, Ali Antar, 26, Hamdi Qayyim, 30, and Mishaal Zahi Baghdadi, 27, were all killed in the Israeli assault and 20 people were injured, some of them critically.

Meanwhile, Qusai Tamimi, 19, was also killed by soldiers in Nabi Saleh village, north of Ramallah, during clashes that erupted to protest the army assault on Nablus. He was buried in his village.

The Palestinian presidency has condemned the assault and killings, describing them as a war crime.

Prime Minister Mohammad Shtayyeh mourned the six Palestinians, calling on the United Nations and international human rights organizations to urgently intervene to stop the aggression in which the occupation forces use anti-armor missiles and drones to target the people in their homes.

Meanwhile, clashes erupted between Palestinians and Israeli soldiers at different contact points in the West Bank during which the soldiers fired tear gas and rubber bullets at the Palestinian protesters causing several minor injuries.

The occupied territories have also observed a general strike in protest against the Israeli aggression and in mourning of the dead.