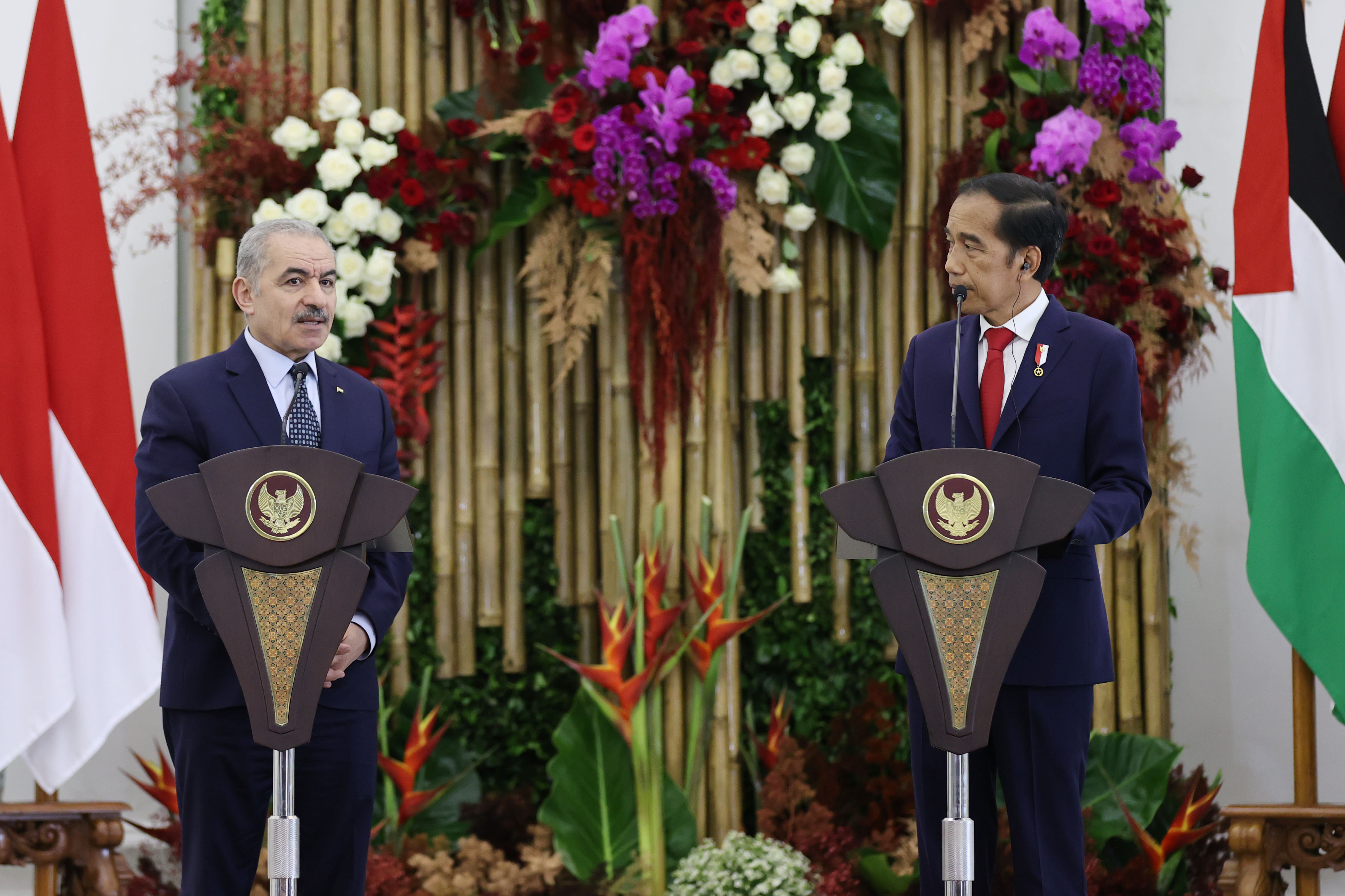 Speaking at a press conference with Indonesian President Joko Widodo at the Presidential Palace in West Java, Premier Shtayyeh voiced his hopes that the Palestine question would be placed on the agenda of the upcoming Group of 20 (G20) summit, scheduled in Bali on Nov 15 and 16.

He also voiced his hopes that the final communiqué of the summit would call for an end to the foreign Israeli occupation of the Palestinian territories, recognize the State of Palestine, and support Palestine’s bid for a full membership of the United Nations.

He stated that the Palestine question was facing many challenges as the world was preoccupied with other issues, creating a political vacuum which requires international efforts to be filled.

He expressed his gratitude to President Widodo and the Indonesian people for providing support for efforts aimed at enabling the Palestinian people realize their right to independence.

“We express our high gratitude to your Majesty for Indonesia's ever-stopping and unbounded support in political programs or efforts towards independence and obtaining full membership at the United Nations," Shtayyeh said.

While Israel is bracing for its forthcoming parliamentary elections, scheduled for November 1, Shtayyeh noted Israel’s elections campaign came at the expense of the Palestinian people, particularly that the occupation authorities have been denying Palestinians their right to hold elections, including in Jerusalem.

According to ANTARA News Agency, Indonesia’s national news agency, President Widodo stated that the Indonesian government was ready to facilitate achieving intra-Palestinian reconciliation to support full independence of Palestine while emphasizing that unity is the most important aspect for a nation to realize its independence.

The President reiterated his country’s support for Palestine to be accepted as a full member state of the United Nations, noted that Indonesia’s stance on this issue was the result of the close relationship between the two countries, while recalling that Palestine was one of the first countries to recognize Indonesia's independence.

Tackling the issue of Palestine’s independence, President Widodo stated that the “the old challenge of the settlement of the issue (of independence) of Palestine has not been successfully resolved through a peaceful and fair solution.”

Hence, he deemed it important to continue to encourage the international community to offer unwavering support to Palestine in its struggle to gain independence.

Both officials signed a capacity building memorandum of understanding to support the establishment of an independent Food and Drug Authority in Palestine.

Indeonesia’s national news agency (ANTARA) said that Indonesia provided assistance in the form of training and capacity building for 1,257 Palestinians in the fields of infrastructure, technology, information, tourism, light manufacturing, and agriculture worth US$1.5 million for Palestinians under the framework of the Conference on Cooperation among East Asian Countries for Palestinian Development (CEAPAD) as well as assistance of Rp20 billion for construction of the Indonesian Cardiac Center at the As-Shifa Hospital in Gaza.