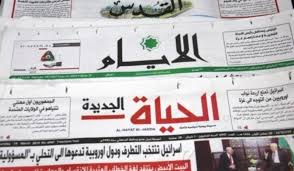 RAMALLAH, Saturday, August 27, 2022 (WAFA) - The three Palestinian Arabic dailies published today, al-Hayat al-Jadida, al-Ayyam, and al-Quds, highlighted the Israeli army crackdown on the weekly anti-occupation, anti-settlements protests in the occupied West Bank as well as the protests in support of the Palestinian freedom fighters as they wage an open-ended protest activity in the prisons demanding rights, and the dozens of injuries caused from the Israeli army’s use of firepower against the defenseless Palestinian protesters.

Here are the main headlines from the three dailies:

Tension was high in the occupation prisons, additional forces were summoned, and dogs are used in the suppression

Israeli poll: The battle for the Knesset elections is still inconclusive

As usual, the Israeli prosecution closes the investigation file against the killer of the Ali Harb

Addressing inflation in America: Painful and will take time

Biden: Democrats must save the country from "semi-fascist" Republicans, Donald Trump

A woman dies, two are injured as a result of the collapse of a rocky ridge in Dura

In the besieged Gaza Strip, they burn plastic to extract fuel

Pakistan declares a state of emergency due to floods

Nablus: Shots fired at a settler's car, damaging it

New York: The Palestine Committee holds a meeting with Guterres to break the political deadlock

New Israeli admission of responsibility for the al-Faluja cemetery massacre

Israel: Washington is preparing a military option against Iran in parallel with the nuclear negotiations

Bloomberg: Rivers around the world are turning into dust and almost disappearing

A woman dies in a rockslide in Dura

New Israeli admission of responsibility for the al-Faluja cemetery massacre

UNRWA declares it is facing an existential threat