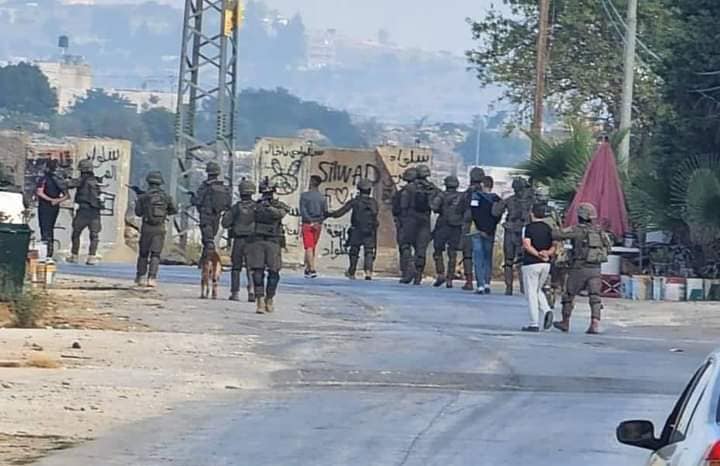 They said that a sizable Israeli army force stormed Silwad town, east of Ramallah city, where the soldiers broke into dozens of houses, assaulted the residents with dogs, conducted thorough searches and eventually detained 29 Palestinians.

While in the town, the soldiers showed up at the premises of Silwad Sports Club, smashed the main and internal doors, conducted a search and tempered with the contents, causing extensive destruction.

The soldiers detained another from Ni‘lin town, west of Ramallah, and ransacked his family houses, turning it topsy-turvy.

In the southern West Bank, the sources confirmed a raid in Tarqumiyah town, west of Hebron, leading to the detention of three others.

By the time the raid was over, the soldiers confiscated the private vehicle of a resident.

The gun-toting soldiers rounded up another from Hebron city.

In the northern West Bank, a convoy of army vehicles stormed Jayyus town, east of Qalqiliya city, where the soldiers rounded up two others.

In Tulkarm district, an army force barged its way into Nur Shams refugee camp, rounded up three residents and wreaked havoc inside the houses of their families.

The raid triggered confrontations during which the soldiers shot a young man who was standing in front of his house by a live round in the thigh.

The casualty was rushed to a hospital and his condition was described as stable.

The sources confirmed a similar raid in Dhanaba neighborhood, east of the city, resulting in the detention of another.

In Jenin district, the sources confirmed that Israeli soldiers detained a resident of Jaba‘ town, south of the city, during a raid that resulted in the killing of 20-year-old Rafiq Riyad Ghannam.

The soldiers showed up at the family house of a former prisoner in Jenin refugee camp, muscled inside and eventually re-arrested the former prisoner.

During the ensuing confrontations, a young man sustained wounds after being shot by the soldiers by a live round in the foot.