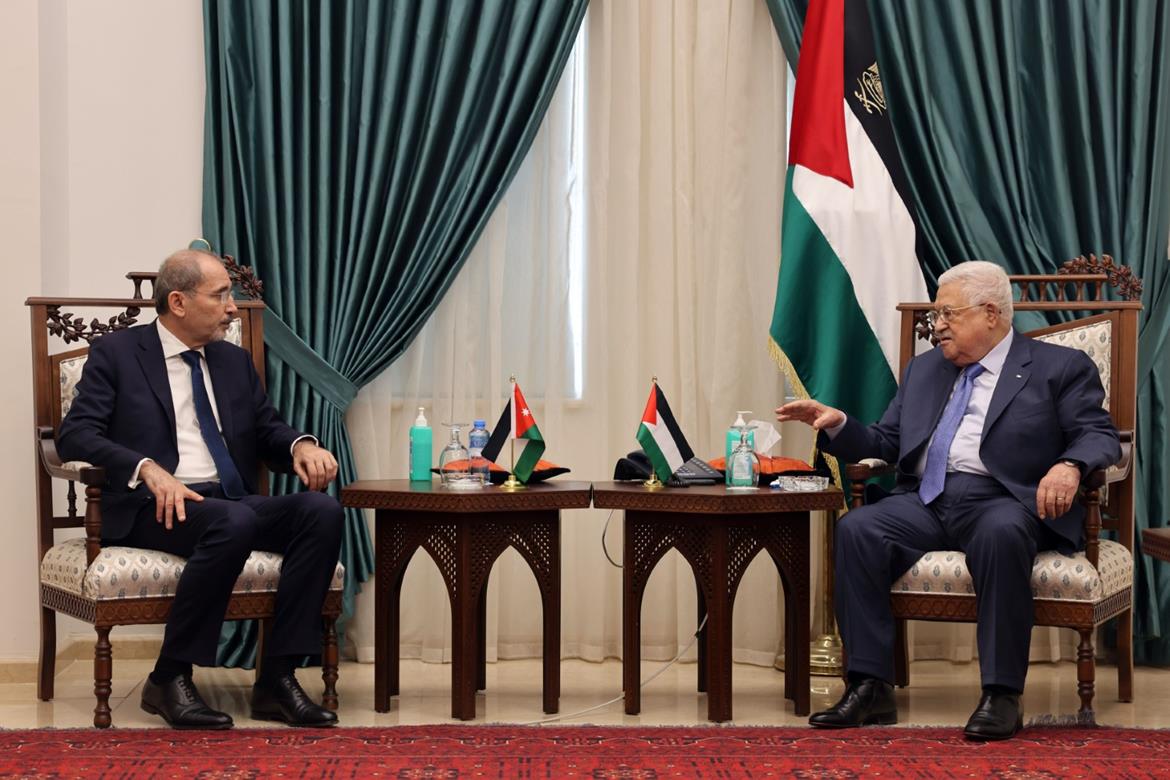 President Mahmoud Abbas during a meeting in Ramallah with Jordanian Minister of Foreign Affairs and Expatriate, Ayman Safadi

RAMALLAH, Tuesday, May 31, 2022 (WAFA) – President Mahmoud Abbas discussed today with Jordanian Minister of Foreign Affairs and Expatriate, Ayman Safadi, the latest developments in the Palestinian territories, and the dangerous Israeli escalation against the Palestinian people and their Islamic and Christian holy sites.

During a meeting in Ramallah, Safadi and Jordan's General Intelligence Department chief, Major General Ahmad Husni, handed president Abbas a message of solidarity and support from King Abdullah II for the official Palestinian position in the face of challenges facing the Palestinian cause and the Palestinian people.

President Abbas said the current situation cannot be accepted nor tolerated amid the absence of a political horizon and international protection for the Palestinian people and in light of the Israeli occupation's disavowal of its obligations in accordance with signed agreements and resolutions of international legitimacy.

He also rejected the continued Israeli unilateral actions, especially in Jerusalem, the daily assaults on Al-Aqsa Mosque, the expulsion of Palestinians from Jerusalem's neighborhoods and the demolition of their homes, the killing of the defenseless Palestinian people including children, the crimes of settlement construction, and settler terrorism.

President Abbas stressed that the Palestinian leadership is in the process of taking action to confront this Israeli escalation, in light of the international community’s inability to compel Israel to comply with the resolutions of international legitimacy and its failure to stop Israel’s criminal and occupying practices, ethnic cleansing measures, and racial discrimination, amid the US silence on these provocations and practices that are in flagrant violation of international law.

He hailed the depth of the brotherly relations between the two countries and the two peoples, praising the stances of His Majesty King Abdullah II in supporting the Palestinian people and their legitimate rights in international forums and at all levels.

He stressed the keenness of the Palestinian and Jordanian sides to continue coordination and consultations at the highest levels.

For his part, Safadi affirmed Jordan's firm support for the Palestinian cause and the rights of the Palestinian people, and the king's instructions to continue coordination and consultations for an international mobilization to confront Israel’s settlement expansion, settlers' crimes, and its practices that violate the historical situation in the Al-Aqsa Mosque.

He pointed out that the Palestinian and Jordanian sides will continue contact and consultations with the international community and concerned countries.