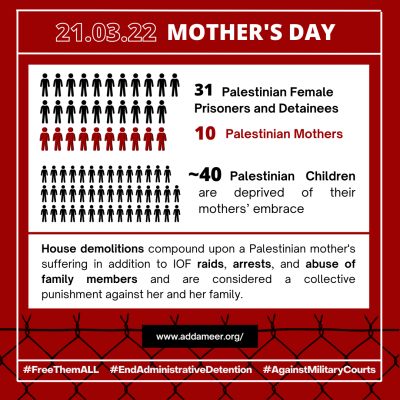 RAMALLAH, Monday, March 21, 2022 (WAFA) - As March 21 marks Mother’s Day in the Arab world, the Israeli occupation continues to incarcerate 10 Palestinian mothers in Damon Israeli occupation prison, depriving them and their families of commemorating the day together, Addameer for Prisoners’ Support and Human Rights in a statement.

Currently, the Israeli occupation holds 31 Palestinian female political prisoners, including one administrative detainee held without charge or trial, 14 detainees held under trial, 16 prisoners serving their sentences, and one minor.

Collectively, the 10 Palestinian female political prisoners are the mothers of 40 sons and daughters deprived of their mothers’ embrace, all forms of physical contact, and their childhood is taken from them by their mothers' absence.

The Israeli occupation deprives about 4,400 Palestinian mothers of their sons and daughters imprisoned in occupation prisons.

The Israeli occupation authorities prohibit a large number of mothers from visiting their children under the pretext of ‘security’ bans or claims that there are no ‘links of kinship’ between the two, said the statement.

All such practices aim further to isolate Palestinian prisoners and detainees from the outside world and exacerbate their suffering, particularly in light of the outbreak of COVID-19 and the arbitrary restrictions and prohibitions imposed on family visits.

Further, the Israeli occupation authorities abuse Palestinian women and mothers upon the arrest of their sons, imposing arbitrary and cruel punishments on claims that they aided in “covering up the actions of their children.”

The Israeli occupation and apartheid regime’s systematic practice of collective punishment, in blatant contravention of international law, affects Palestinians of all categories, particularly mothers whose children are arrested in front of their eyes and subject to physical assault during the moments of arrest, as was the case with the mother and sisters of Muhammad Abu Akar, who were subject to physical and psychological abuse as a collective punishment for the entire family, as explicitly stated by the officer.

“Such practices and outright admission comes in light of the continued impunity of Israeli occupation authorities for their crimes committed against the Palestinian people within broader apartheid and a colonial regime that has committed gross violations over the past several decades.”

Palestinian mothers also suffer from the Israeli occupation’s practice of home demolitions after Israeli occupation authorities claim that their sons or husbands carried out military operations. Home demolitions compound upon the mother's suffering in addition to IOF raids, arrests, and abuse of family members are considered a collective punishment against her and her family.

To mark Mother’s Day, which falls every year on 21 March, Israeli occupation authorities continue to persecute, arrest, and abuse Palestinian mothers, separating them from their children for months and years and levying collective penalties that aim to compound their suffering, said the statement.