Young Palestinian shot and killed by Israeli soldiers in Nablus, three others injured, one critical 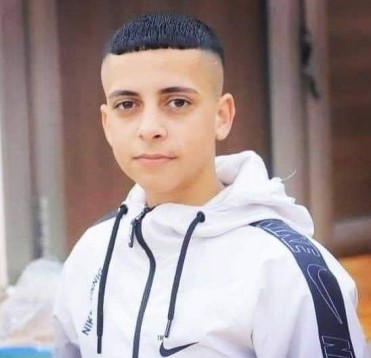 Nader Haytham Rayan, 16, was hit by several bullets in the head, chest, belly and hand and killed immediately.

NABLUS, Tuesday, March 15, 2022 (WAFA) – A 16-year-old Palestinian was shot and killed by Israeli soldiers this morning in Balata refugee camp in the northern West Bank city of Nablus and three others were wounded, one of them critical, according to the Ministry of Health and witnesses.

The Ministry of Health said Nader Haytham Rayan, 16, was hit by several bullets in the head, chest, belly and hand and killed immediately.

Three others were injured and brought to a Nablus hospital, one of them critical after he was hit in the chest by a live bullet, while another was hit in the leg and a third received burns in the face and neck from a concussion bomb.

Witnesses said soldiers entered the camp to arrest activists when they were confronted by residents.

The soldiers opened live fire at the residents killing one youth and injuring the three others. One person was also detained.

The Ministry of Health said Israeli occupation forces have killed 20 Palestinians in the occupied territories since the start of this year.