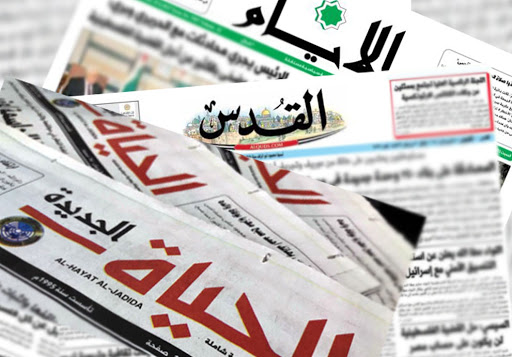 RAMALLAH, Wednesday, February 02, 2022 (WAFA) – News about the report released on Tuesday by Amnesty International on Israel's apartheid regime and racist policies and practices against the Palestinian people hit the front page of the three Arabic Palestinian dailies published today.

Al-Hayat al-Jadida, al-Ayyam and al-Quds said that Amnesty International said in what it described as a "damning" new report released on Tuesday that Israeli authorities must be held accountable for committing the crime of apartheid against Palestinians,

The papers said that the investigation details how Israel enforces a system of oppression and domination against the Palestinian people wherever it has control over their rights.

They added that the comprehensive report, Israel’s Apartheid against Palestinians: Cruel System of Domination and Crime against Humanity, sets out how massive seizures of Palestinian land and property, unlawful killings, forcible transfer, drastic movement restrictions, and the denial of nationality and citizenship to Palestinians are all components of a system which amounts to apartheid under international law. This system is maintained by violations, which Amnesty International found to constitute apartheid as a crime against humanity.

According to the papers, The State of Palestine welcomed the report through a statement issued by the Ministry of Foreign Affairs and Expatriates. It said that "Amnesty International joins a long list of distinguished Palestinian, Israeli and international human rights organizations and experts in exposing Israel's colonial occupation for what it is: an institutionalized system of oppression and domination over the Palestinian people, designed to legitimize its colonial settlement expansion, deny the Palestinian people their inalienable right to self-determination, and erase Palestinian history, present, and future in their homeland."

The apartment was sealed in line with a ruling passed by the Israeli Supreme Court, which previously rejected an appeal lodged by the family against the demolition order. Abu Shkhaydam was gunned down by Israeli police after killing an Israeli and injuring three others near the Chain Gate in the Old City of Jerusalem on November 20, as reported in the dailies.

The papers said that Israeli forces demolished a number of vegetable stands near the military checkpoint of al-Jalama, north of the occupied West Bank city of Jenin.

Additionally, the forces detained 32 Palestinians in large-scale raids across the West Bank, said the dailies.

The newspapers said that a large Israeli army force raided an area in the south of the West Bank and demolished three Palestinian-owned structures and a water network.

In what appears to be the groundwork for the establishment of another illegal settlement, Israel today set up rooms on land in the northern Jordan Valley, east of Khirbet Humsa al-Fouqa, according to the dailies.

The papers said that a sharp rise was recorded in the number of new Covid-19 cases, hospitalized patients, and deaths in Palestine in the last 24 hours.