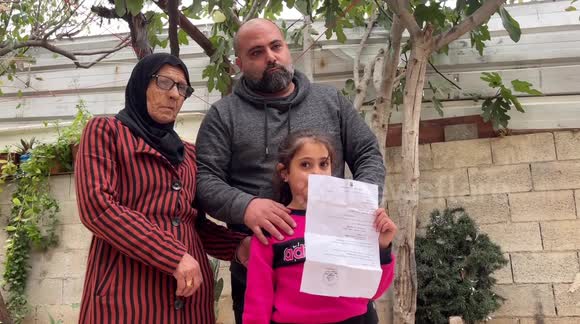 JERUSALEM, Monday, January 31, 2022 (WAFA) – An Israeli court tonight ordered the Salem family in Sheikh Jarrah neighborhood of occupied East Jerusalem to leave their home where they lived for decades and hand it over to Jewish settlers in March, according to the house owner Ibrahim Salem.

He told WAFA that the court ordered the eviction of the family in the period between March 1 and April 1 after right-wing Israeli member of the West Jerusalem city council, Yonatan Yosef, and deputy West Jerusalem mayor, Arieh King, claimed to have bought the house from its alleged pre-1948 Jewish owners.

Salem said the papers presented by Yosef and King were forged, and yet the court accepted their claim to the house.

He said he is going to appeal the court's ruling to the Israeli High Court.

"We will fight for our right to our land and house," he said.

Three families of 10 people, four of them children, live in the house.

The predicament of the Salem family, itself refugees forced to leave their homes in what is now Israel in 1948, started in 1987 when Jewish settlers obtained an eviction order. However, the family succeeded in freezing it in the same year.

However, in 2012, the settlers reopened the case in order to enforce the 1987 eviction order and the family received another eviction order in 2015. The family was given until December 29 of last year to leave the house. The order was not implemented following a public and international uproar over Israel's policy to expel Palestinians from their homes in Sheikh Jarrah in order to turn them over to Jewish settlers.

The family had lived in the house since 1951.