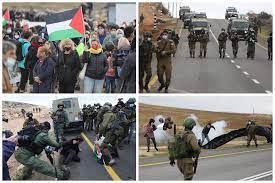 QALQILIA, Sunday, December 26, 2021 (WAFA) – A number of Palestinian youth suffocated by tear gas, and others were detained today evening as Israeli occupation forces attacked a protest on the Nablus-Qalqilia Street near the village of Al-Fundaq organized by activists in protest of the increasing number of attacks by Israeli settlers against Palestinians in the village of Burqa’a to the northwest of Nablus.

Activist Akef Jpma’a said the protest was organized in support of the residents of Burqa, northwest of Nablus, who have recently been subjected to a rise in settlers’ attacks and terrorism.

Participants in the protest raised the Palestinian flag and chanted slogans condemning the settlers' attacks on the Palestinian people, especially in the village of Burqa, which are done under the protection of the Israeli military.

Juma'a pointed out that the occupation soldiers fired rubber-coated metal bullets and tear gas at the peaceful protestors, causing suffocation to a number of young men who received treatment at the scene. Several people were detained by the army.