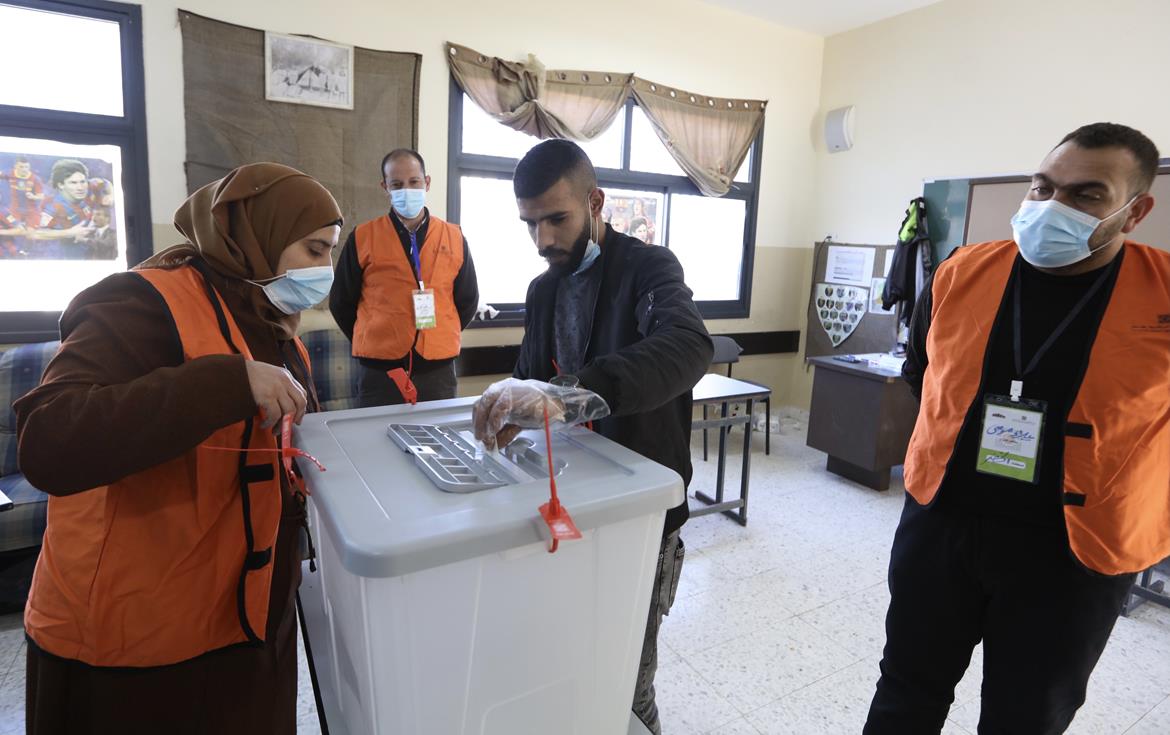 Voters casting their vote in the first phase of local elections in the Bethlehem district. (WAFA Images / Ahmad Mizher)

RAMALLAH, Saturday, December 11, 2021 (WAFA) – Polls opened this morning for the first phase of local elections at 154 Palestinian localities, all in the West Bank, after attempts to hold elections in 11 Gaza Strip localities have failed and therefore delayed until the second phase scheduled for March 26, today said Hanna Nasir, chairman of the Palestinian Central Elections Commission (CEC).

Polling centers opened their doors at 7:00 a.m. and will continue until 7:00 p.m. to enable eligible voters, who are estimated to be around 405,000 voters, to cast their votes.

The Palestinian cabinet issued on September 6 a decision calling to hold the first phase of the local council elections in the West Bank and Gaza Strip in 387 localities, including all localities classified as “C”, under full Israeli control.

“We tried, by all means, to include the Gaza Strip in the first phase of the elections,” said Nasir.

However, according to Minister of Local Government Majdi al-Saleh, Hamas, which controls the Gaza Strip, refused to allow the Palestinian Authority to hold local elections in the besieged sea enclave.

He told WAFA that the government attempted to persuade Hamas to allow elections in Gaza but without success, accusing Hamas of appointing mayors for the various councils in an illegal manner and under flimsy pretexts.

He expressed hope that Hamas would change its position and allow elections in the second phase in March, which will take place in 66 localities, 55 of which are classified as Area “A”, under full Palestinian control, and “B”, under Palestinian civil administration and Israeli military rule, in the West Bank and Gaza Strip, in addition to the delayed 11, which are classified as “C” localities in the Gaza Strip, and were previously included in the first phase of the elections.

The village councils have nine members, while the municipal authorities have three kinds of councils based on the number of people living there and include councils of 11, 13, or 15 members.

The number of eligible voters is 405,687 who are registered in 222 polling centers, which have 717 ballot boxes. While the number of polling staff in these centers exceeds 4000 employees.

In addition, 573 electoral lists were nominated for the first phase of the local elections, which include 4480 candidates, of whom 26% are women, and will be competing for 1514 seats.

Nasir said 1600 local and international teams, including foreign diplomats, are monitoring the elections.

“Everything so far is going very well and according to health regulations,” stressed Nasir.