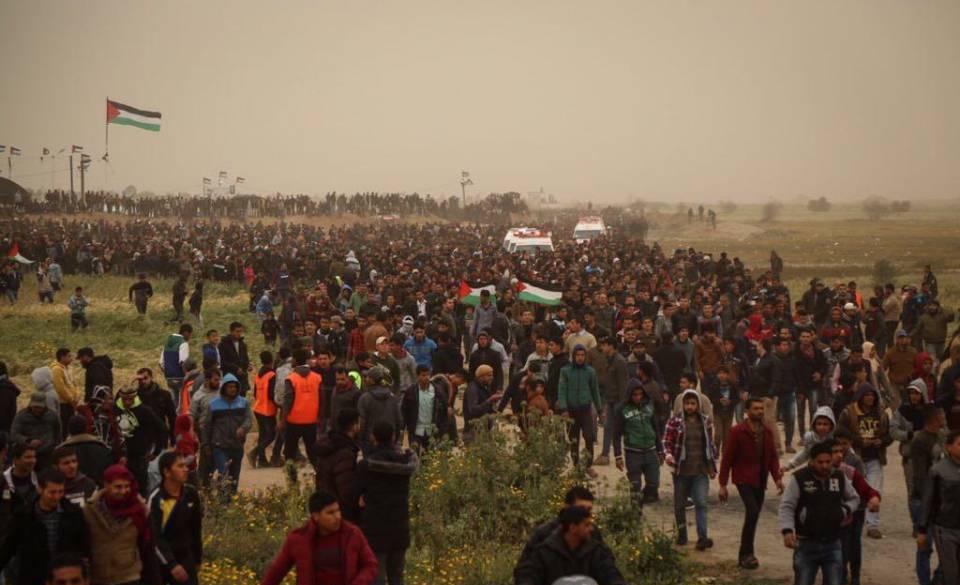 RAMALLAH, Friday, December 03, 2021 (WAFA) - A fact-finding report released yesterday accuses the Israeli occupation army of improperly investigating its own policies and practices during the Great March of Return, when hundreds of people were killed as Palestinians in Gaza rallied along the fence separating the enclave from Israel every Friday for nearly two years.

The protest campaign called for an end to the blockade on Gaza, imposed by Israel since 2007, and for Palestinian refugees' right of return to the lands that their families fled or were forced out of during the establishment of the state of Israel in 1948.

The 32-page report, entitled “Unwilling and Unable: Israel’s Whitewashed Investigations of the Great March of Return Protests,” was compiled and released by the Palestine Center for Human Rights (PCHR) in Gaza and B’Tselem, an Israeli human rights group.

It details how the military implemented an illegal policy of using live fire, mostly carried out by snipers, against unarmed Palestinian protestors.

Researchers said Israeli officials had pledged to investigate the open-fire practices in response to international pressure, but failed to question anyone involved in writing or implementing the policies.

Raji Sourani, PCHR’s executive director, said during a news conference on Thursday that the researchers had been working on the report for more than a year, interviewing witnesses and gathering information on the impact of the open-fire policy.

“They shot [the] handicapped, they shot children, young, old, [in order] to kill or to paralyse and amputate any parts of the body,” he said. Others killed in the protests included medics and journalists.

Instead of focusing on the implementation of the open-fire policies, according to the report, Israeli investigators focused on specific killings deemed “exceptional”.

This meant the military did not conduct factual reviews of killings if the target was deemed a “terrorist”, though the state has not explained how it determines that status.

The report says that even in cases investigated by the military there was little accountability.

The Israeli military convicted the soldier who shot Jamal on a plea deal after he admitted to opening fire without approval from superiors. The soldier received a one-month sentence of military labour.

Stein said the case was “indicative” of how Israel “never actually intends to do anything”.

The report also outlines how the Israeli military defended its practices during the protests in Israel’s High Court of Justice by arguing that Israeli lives were in danger - a claim Stein dismissed as a “clear lie.”

Earlier this year, the International Criminal Court (ICC) launched an investigation into potential war crimes committed by Israel in Gaza and the West Bank since 2014.