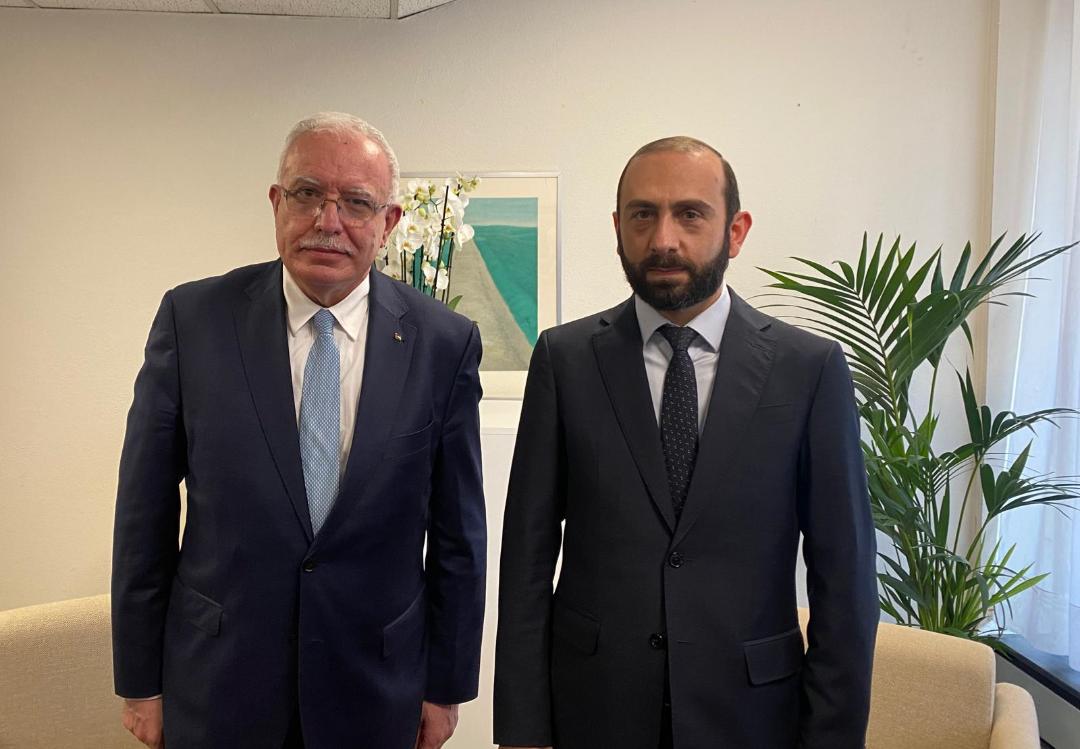 During a meeting on the sidelines of the 41st session of the UNESCO General Conference in Paris, Foreign Minister al-Malki discussed with his Armenian counterpart Mirzoyan the leasing the “Goveroun Bardez” plot of land, located in the historic Armenian Quarter of East Jerusalem and owned by the Armenian Patriarchate Jerusalem, to the Israeli occupation authorities, namely the Jerusalem municipality and Jerusalem Development Authority.

Al-Malki underscored the gravity of the transaction, which would open the door for the gradual encroachment of Israel’s settler-colonialism into the Aremian Quarter in Jerusalem.

He urged the Armenian Foreign Ministry to intervene to protect the properties of the Armenian Church in the Old City, stop any action that can affect its legal and historic status and safeguard the Palestinian people and Armenians’ rights to the Old City.

The top Palestinian diplomat stressed the need for the Armenian Foreign Ministry to take prompt action and exert pressures in order to cancel this “suspicious transaction”, which risks accelerating the obliteration of the Palestinian, Muslim and Christian, character of Jerusalem.

He commended the close historical Palestinian-Armenian relations and asserted Palestine’s aspiration to open an embassy in Armenia while he invited his counterpart to visit Jerusalem to explore means of cooperation.

Armenia’s top diplomat, Mirzoyan, affirmed the deep bilateral relations and the need to further develop them.

According to Keghart, a news website devoted to Armenian Affairs, Archbishop Nourhan Manougian and  the Patriarchate’s Director of the Real Estate Department Fr. Baret Yeretsian signed signed a 10-year contract with the Jerusalem Municipality allowing the “Goveroun Bardez” area located in the historical Armenian Quarter to be used as a parking lot for Jews visiting the Western Wall in the Old City in March 2020. This parking lot was officially opened in May of 2021.

Then, in July of 2021, the patriarchate signed a new contract with Dany Rubinstein, an Australian businessman, leasing the “Goveroun Bardez”, which is the entire southwestern section of the Armenian Quarter, for 99 years. Rubinstein’s plan is to construct a hotel on that land and give a small percentage of the profit to the Church within five years’ of the hotel completion.

Al-Malki joined a chorus of Palestinian officials who condemned the transaction, including head of the Palestinian Higher Presidential Committee for Churches Affairs, Ramzi Khoury, who sent a letter to the Catholicos of All Armenians, Patriarch Karekin II, calling land transactions in the Armenian Quarter in the Old City of Jerusalem a violation of international law, since the area inside the Old City is an “integral part of the Palestinian occupied territories” governed by relevant international resolutions.