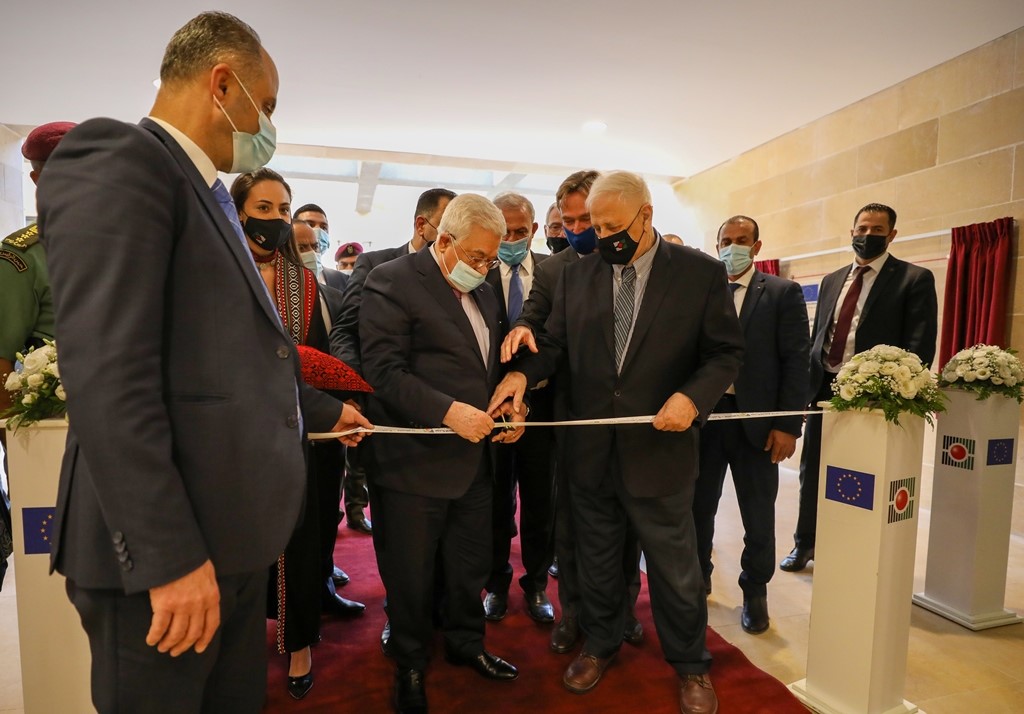 RAMALLAH, Tuesday, November 9, 2021 (WAFA) - Under the auspices and in the presence of Palestinian President Mahmoud Abbas, the Palestinian Authority and the European Union inaugurated today the new headquarters of the Palestinian Central Elections Commission (CEC) in Ramallah.

In his speech on behalf of the CEC, Nasir welcomed President Abbas and thanked him for attending the opening of the new CEC headquarters, which comes in parallel with the first round of the local elections scheduled for 11 December.

Nasir expressed hope that the inauguration of this new headquarters will be a starting point for holding general elections as soon as possible in East Jerusalem, the West Bank and Gaza Strip.

He also thanked the European Union for funding the construction and furnishing of this new headquarters in accordance with the best international standards. He also expressed appreciation of the strategic long-standing partnership between the EU and the CEC since its establishment.

For his part, Burgsdorff said: “This project is not just about a new building and better workspace for our partners at the CEC. This is about maintaining hope for millions of Palestinian youth who never had the chance to vote in national elections. This is about ensuring that every Palestinian can elect his/her leaders in free and fair elections all across the Palestinian territory, including in East Jerusalem. This is about protecting the inalienable human right of the Palestinian people to self-determination. The EU will continue to call for credible, inclusive and transparent elections for all Palestinians. We strongly encourage all Palestinian leaders to resume efforts to build on the talks between the factions over recent months. A new date for national elections should be set without delay.”

The old CEC headquarters was located in Ramallah - Al Bireh. This new single integrated building for the CEC will better serve the mandate of the Commission and ensure that security standards are met. The new building will also significantly reduce the operational costs for the CEC.

The EU has contributed €6 million to the new building. It extends over 6500 square meters and consists of seven floors. The building includes the Central Elections Commission's technical departments, in addition to conference halls, warehouses, and a data entry center. It also serves as the district office for the governorate of Ramallah.

The EU assists the CEC in its efforts towards accountable governance, democratic elections and the promotion of a pluralist society. Through this partnership, the EU and the CEC work together to make sure that all Palestinians can effectively participate in democratic decision-making.