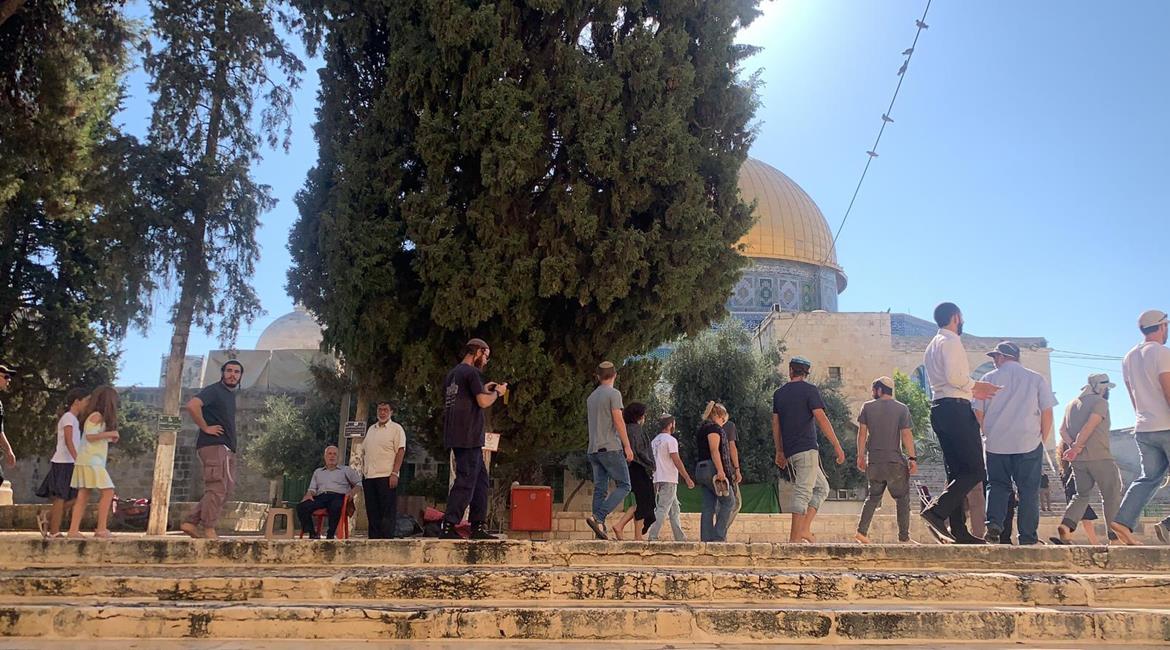 Jewish fanatics on a provocative tour of Al-Aqsa Mosque.

AMMAN, Tuesday, September 28, 2021 (WAFA) – Jordan today protested Israeli violations of the sanctity of Jerusalem’s Al-Aqsa Mosque, the third holiest site in Islam, and called on the Israeli government to respect the status quo of the Muslim holy place.

Jordanian Foreign Ministry spokesman, Haitham Abu al-Ful, was quoted by the Jordanian Petra News Agency saying the ministry sent an official protest letter to Israel calling on it to stop its violations and provocations, and respect the historical and legal status quo as well as the sanctity of Al-Aqsa Mosque.

He said Jordan rejects and condemns these violations, which are a provocation to the sentiments of Muslims around the world, and Israel’s obligations, as the occupying power, in East Jerusalem under international law and international humanitarian law.

Abu al-Ful stressed that the holy Al-Aqsa Mosque, with its entire area of 144 dunums, is a place of worship purely for Muslims, and that the Jerusalem Waqf (Endowment) Department, which is responsible for the affairs of Al-Aqsa Mosque and is a Jordanian government department, is the legal body with exclusive jurisdiction to run all of the affairs of the Mosque and to regulate entry and exit from it.

The Jordanian ministry’s strong reaction came following Israeli government support for the presence of a large number of Jewish fanatics at the holy compound this month and allowing them to perform religious rituals in the yards of the Mosque in violation of standing regulations and the decades-old status quo.

Jordan is the official custodian over the Muslim and Christian holy places in occupied Jerusalem.

After shooting at a radio station in Nablus, journalists syndicate renews call for international protection