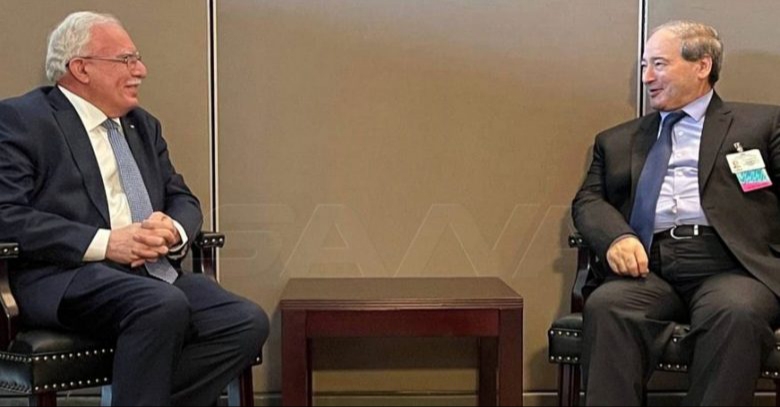 NEW YORK, Saturday, September 25, 2021 (WAFA) – Minister of Foreign Affairs and Expatriates Riyad al-Maliki met today with his Syrian counterpart Faisal Mekdad on the sideline of the UN General Assembly’s 76th session in New York, and discussed with him the latest developments in Palestine and the Middle East region.

The two foreign ministers discussed ways to restore stability in the region, as well as the centrality of the Palestinian cause as the key to achieve regional stability based on the right of the Palestinian people to independence, self-determination and end of the Israeli occupation.

Al-Maliki briefed his Syrian counterpart on the efforts to engage the international community in protecting the Palestinian people from the ongoing Israeli crimes and the need to hold Israel to account.

The two ministers also discussed ways of boosting the United Nations Relief and Works Agency for Palestine Refugees in the Near East (UNRWA) for its vital services to the Palestinian refugees, especially in war-torn Syria.

Miqdad affirmed that the Palestinian cause will remain the central issue of the Syrian people, and that his country will continue to fully support the Palestinian people in their struggle for self-determination, independence and statehood.