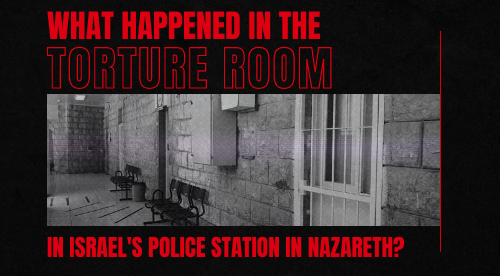 HAIFA, Monday, June 7, 2021 (WAFA) - Adalah – The Legal Center for Arab Minority Rights in Israel said that multiple sworn affidavits from the past few weeks testify to rampant, systemic Israeli police attacks and brutal beatings of Palestinian citizens of Israel – protesters, minors, innocent bystanders, and even attorneys – inside the city's police station; floor of 'torture room' was covered in blood from violent police beatings.

Lawyers from Adalah collected multiple sworn affidavits testifying to rampant, systemic Israeli police attacks and brutal beatings of Palestinian protesters, innocent bystanders, children, and even attorneys inside Nazareth's police station during the period of protests in the city in May.

The graphic testimonies from victims, attorneys, and paramedics on the scene tell a story of systemic Israeli police brutality and physical, verbal, and psychological abuse of Palestinian citizens of Israel in the northern city, and indicate that Israeli officers ran a "torture room" inside the Nazareth police station – an informal term whose initial use may be traced to the recent detainees and lawyers on the scene, said Adalah.

Adalah submitted a formal complaint to senior Israeli officials today, Monday, 7 June 2021, regarding serious failures on the part of Israeli police and investigators in Nazareth that amount to grave criminal offenses, starting on 9 May 2021 and continuing for a number of days.

In their letter, Adalah attorneys Nareman Shehadeh-Zoabi and Wesam Sharaf highlighted brutal, overt Israeli police violence in Nazareth in breach of the rights of Palestinian citizens grabbed off the street and held in the station, including the rights to liberty, dignity and bodily integrity, as well as the right to counsel and due process.

Israeli "police officers led the detainees to a room located on the left side of the entrance corridor to the station, forcing them to sit on the floor handcuffed, to lower their heads towards the floor, and began to beat them on all parts of their bodies, using kicks and clubs, slamming their heads against walls or doors, and more. Officers wounded the detainees, terrorized them, and whomever dared to lift his head upwards risked more beatings by officers. According to affidavits, the floor of the room was covered in blood from the beatings."

"What happened inside the police station in Nazareth amounts to torture and ill-treatment, and requires the immediate opening of a criminal investigation to examine the circumstances and conditions of the protesters' detention at the station – including the investigation and prosecution of police officers involved in the violence," Adalah attorneys wrote in the letter.