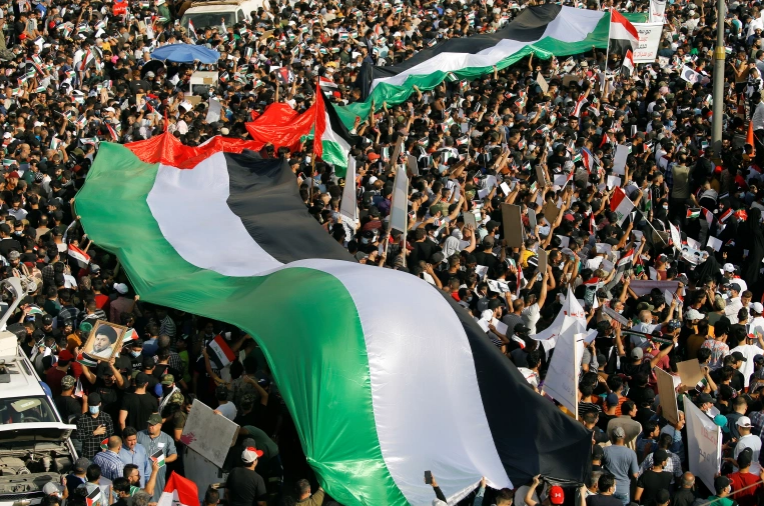 RAMALLAH, Sunday, May 16, 2021 (WAFA) – Large protests were held in solidarity with the Palestinians and in protest of the Israeli aggression on Gaza and Jerusalem around the world, including in London, Sudney, Paris, and Madrid, as well as in Muslim-majority countries including Kuwait, Oman, Pakistan, Tunisia and Turkey.

In Jordan, protesters gathered outside the Israeli embassy, burning Israeli flags and chanting “Shame, shame the embassy is still there” and “Death to Israel!“

In London, tens of thousands' of people gathered at Speaker's Corner in Central London in support of the Palestinian people amid the ongoing Israeli aggression.

Protesters marched to the Israeli Embassy on Kensington Palace Gardens, across Hyde Park, where speeches were made.

Protesters also gathered outside Downing Street, the residence of Prime Minister Boris Johnson against an Israeli court ruling to evict Palestinian families from their homes in Sheikh Jarrah neighborhood in east Jerusalem.

The demonstration in London was organized by Palestine Solidarity Campaign, Friends of Al-Aqsa, Palestinian Forum in Britain, Stop The War Coalition, Campaign for Nuclear Disarmament and the Muslim Association of Britain.

In Australia, thousands of people marched through the streets of Sydney and Melbourne in solidarity with the Palestinian people facing Israel's aggression.

In Sydney, men, women and children waved flags and placards as they chanted "Free Gaza" and "Long live Palestine".

In Iraq, thousands of demonstrators took to the streets in the capital Baghdad and many other cities and shouted anti-Israeli slogans, held signs saying "Death to Israel, death to America" and waved Palestinian flags.

The demonstrators waved Palestinian flags and banners across five provinces in rallies called for by influential cleric Muqtada al-Sadr. Protesters gathered in the Iraqi capital Baghdad and the southern provinces of Babylon, Dhi Qar, Diwanieh and Basra in a show of support.

In Doha, Qatar, thousands waved flags and displayed messages in solidarity with the Palestinians.

In France, hundreds converged in the Barbes neighbourhood in the north of Paris amid a significant security presence of some 4,200 officers.

Paris police used tear gas and water cannon to disperse the rally held despite a ban by authorities, who feared a flare-up of anti-Semitic violence during the worst violence between Israel and Hamas in years.

In Madrid, some 2,500 people, many of them young people wrapped in Palestinian flags, marched to the Puerta del Sol plaza in Madrid.

In Lebanon, Hundreds of Lebanese and Palestinians have protested along the Lebanon-Israel border, with some climbing a border wall and triggering Israeli fire that wounded one person.

Some protesters threw Molotov cocktails and rocks over the wall during a protest on Saturday in the Lebanese border village of Odayseh, where hundreds marched waving Palestinian and Lebanese flags, as well as the yellow banners of the Hezbollah group.

In Germany, thousands marched in Berlin and other German cities following a call by the Samidoun Palestinian Prisoner Solidarity Network.