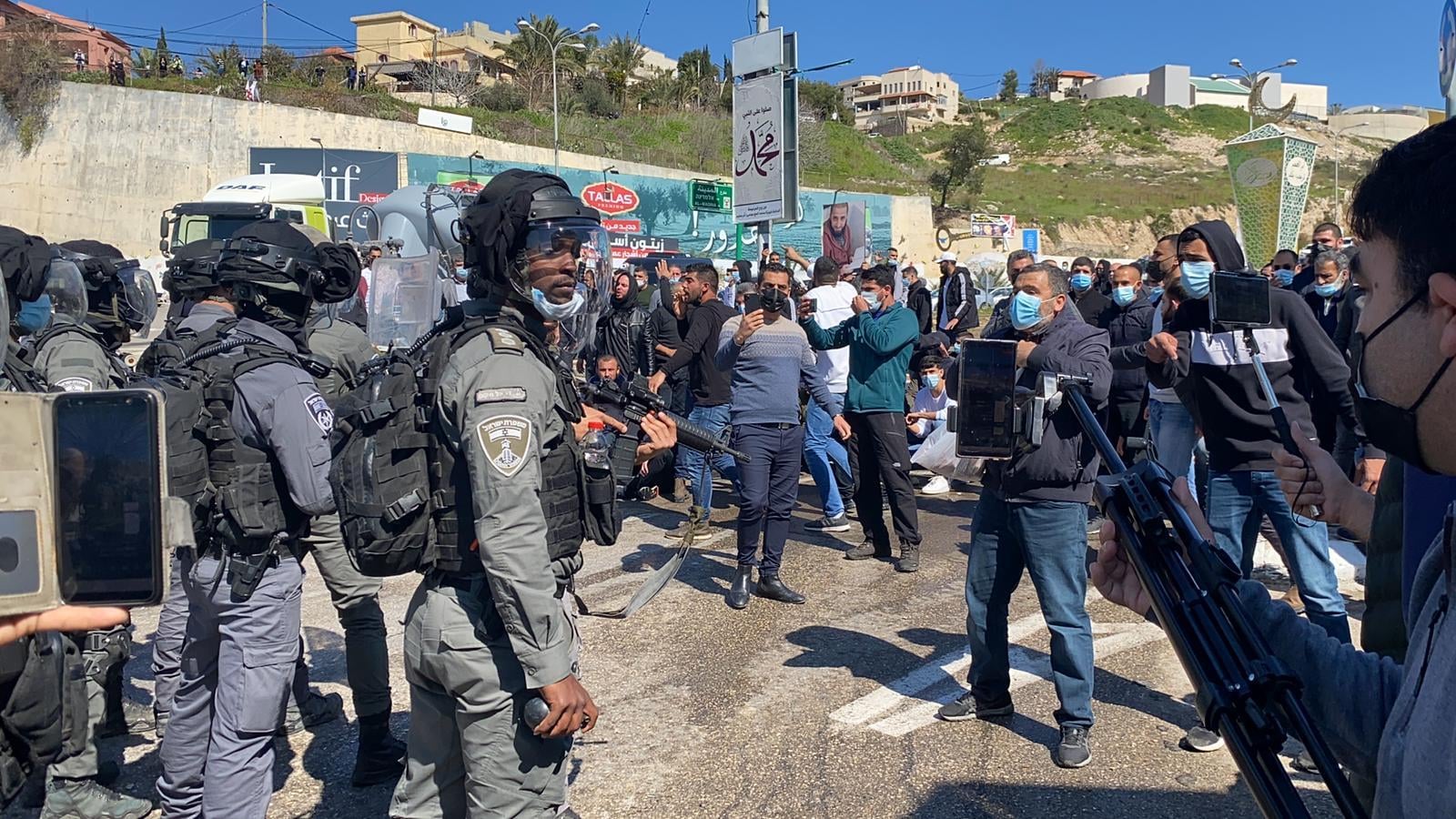 GENEVA, Saturday, February 27, 2021 (WAFA) – The Euro-Mediterranean Human Rights Monitor has strongly condemned the Israeli Police's suppression of demonstrations in Umm al-Fahm, an Arab-majority city in 1948-occupied Palestine, protesting the escalation of violence and crime in the Arab communities.

The demonstration took place yesterday, February 26th, after Friday prayers in front of the municipality of Umm al-Fahm. The protesters headed on foot to the Israeli police station, where police officers used violence and disproportionate force against them. The Police used rubber-coated bullets, teargas, wastewater cannons, sound bombs and batons, leaving 11 civilians injured and seven others arrested.

Umm al-Fahm Mayor, Samir Mahamid, and Knesset member Yousef Jabareen were among  the wounded. Jabareen was hit with a rubber-coated bullet in the back, while Mahamid was injured after he was pushed. Both were taken to HaEmek Medical Center.

The Israeli Police used tools that killed and inflicted bodily harm to disperse the demonstrations, which Euro-Med Monitor said was in violation of international standards whose perpetrators must be held accountable.

One citizen, Muhannad Mahajna, 30, was seriously injured after a stun grenade hit him in the head. He was immediately transferred to HaEmek Medical Center and then to Rambam Hospital in Haifa.

A relative of Mahajna told Euro-Med Monitor: "He underwent brain surgery in Rambam Hospital. The doctors told us that they could control the bleeding, but he needs operations later to stop it permanently. The hospital announced at 8 pm that the surgery ended, but said his condition is still serious".

The Israeli Police also prevented journalists at the location from documenting the event. Anas Musa, a journalist who was filming the event, was ordered to stop and threatened to withdraw his press card, which is another violation of freedom of the press.

The on-going demonstrations in Umm al-Fahm for the seventh week in a row began on January 7, 2021, when a group of young activists called for a protest against the increasing crime rates in the Arab communities as a result of the Israeli Police's inactivity and complicity.

Crime in the Arab towns inhabited by Palestinians in 1948-occupied Palestine has significantly increased since the beginning of this year. At least 15 people have been killed so far, while the number of deaths since 2000 has reached about 1,700.

A legal advisor at the Euro-Med Monitor, Tariq Abdel Razek, said: "The Israeli police's repeated attacks against the demonstrations in Umm al-Fahm, indicate that the Israeli authorities are willing to continue the violence and escalation of crime against Palestinians residing there and in other Arab towns."

"The escalation of violence and crime, especially in the last five years, through killings in alleys and publicly with the latest weapons, gives a clear indication of the Israeli authorities' deliberate reluctance to confront them, since many of them were passing without the Israeli authorities moving a finger," he added.

At the end of its statement, the Euro-Mediterranean Human Rights Monitor called on the Israeli occupation authorities to stop all attacks against peaceful demonstrators and hold all those involved in these violations accountable.