Foreign ministers of Egypt, France, Germany, and Jordan say they are committed to the two-state solution 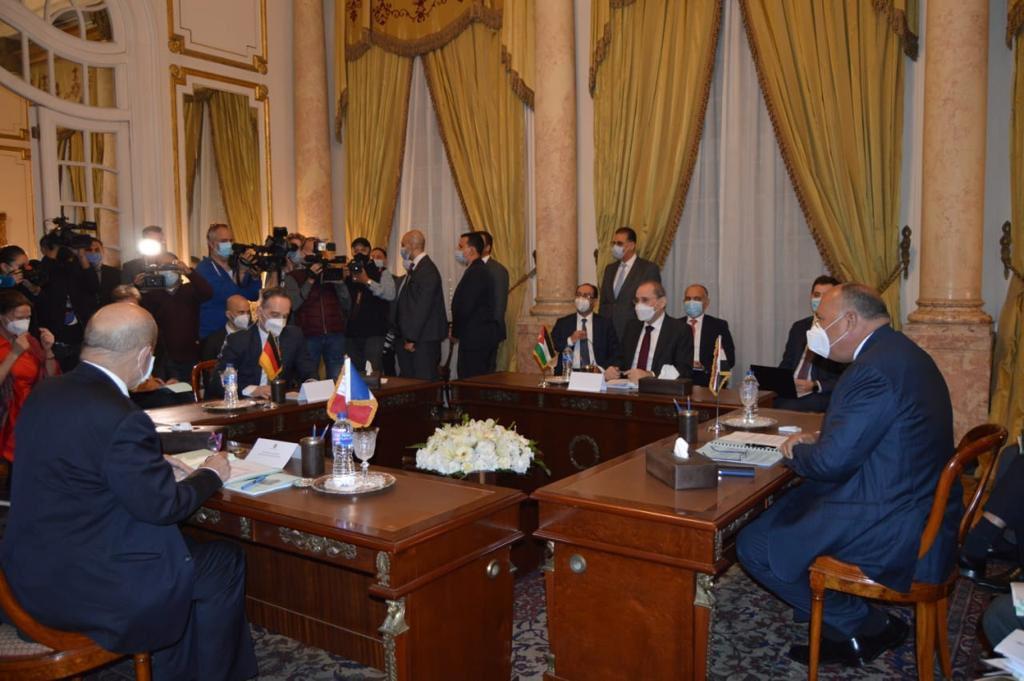 The foreign minister of Egypt, Jordan, Germany and France meeting in Cairo.

CAIRO, Monday, January 11, 2021 (WAFA) –Foreign ministers of Egypt, France, Germany, and Jordan stressed today their commitment to the two-state solution as the only way to establish an independent Palestinian state.

The remarks came during the ministers' meeting in Cairo during which they discussed ways to push forward the Middle East peace process.

They also discussed their recent contacts with the Minister of Foreign Affairs and Expatriate Affairs, Riyad Malki, and his Israeli counterpart. The ministers were informed of the message that Malki addressed to the Egyptian host of the meeting, Sameh Shoukry, according to a joint statement by the four ministers.

The ministers welcomed the meeting as it represents an opportunity to discuss possible steps to advance the peace process and to create an environment to resume Palestinian-Israeli negotiations, appealing to both parties to deepen cooperation and dialogue on the basis of mutual obligations.

The top diplomats stressed their full commitment to support all efforts aimed at achieving a just and lasting peace in the Middle East in accordance with international law and relevant UN Security Council resolutions, and the agreed upon determinants as referred to in the Arab Peace Initiative.

They also expressed their readiness to work with the United States to facilitate negotiations that would lead to a comprehensive, just and lasting peace in the region, on the basis of internationally recognized determinants, and for the re-launch of a credible peace process between the Palestinians and the Israelis.

The ministers called on the parties to refrain from any unilateral measures that undermine the future of reaching a just and lasting solution to the conflict, calling for the implementation of UN Security Council resolutions for an immediate and complete cessation of all settlement activities, including in East Jerusalem.

They also agreed that building and expanding settlements and confiscating Palestinian buildings and property violate international law and undermine the possibility of a two-state solution.

According to the statement, they also stressed the importance of adherence to international humanitarian law in the Palestinian territories occupied in 1967, including East Jerusalem.

The four ministers also stressed the need to preserve the composition, character and status of the Palestinian territories occupied in 1967, including East Jerusalem, highlighting the importance of the historical Hashemite custodianship of Jerusalem holy sites.

The ministers urged all parties, including the International Quartet and its potential partners, to make collective efforts and take practical steps to launch and sponsor credible negotiations on all final status issues.

They welcomed recent developments related to efforts to achieve Palestinian reconciliation as well as the Palestinian Authority's readiness to hold the upcoming elections, pledging to support Egypt's efforts aimed at ending the internal Palestinian division.

The ministers expressed their deep appreciation for the indispensable role of the United Nations Relief and Works Agency (UNRWA) in providing humanitarian assistance and basic services to Palestine refugees, calling on the international community to fulfill commitments to UNRWA in order to help the agency overcome its severe financial deficit.

The ministers agreed to communicate with the Palestinian and the Israeli sides to convey their common vision on working towards peace.