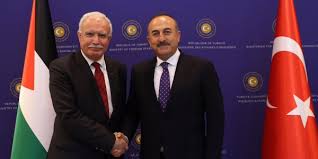 This came during a meeting between the two foreign ministers via video conference.

Malki told his Turkish counterpart that Palestine highly values Turkey's political, financial, and medical support, referring in particular to the medical aid provided by Turkey, especially in light of the Corona pandemic.

He briefed Cavusoglu on the Palestinian efforts to proceed with the internal reconciliation following the recent important meeting held in Istanbul between Fatah and Hamas, stressing the Palestinian leadership’s readiness to hold parliamentary elections, followed by presidential elections as soon as an agreement is reached between all the Palestinian political factions.

The two ministers exchanged their views on the situation in the region and the world, including ideas on how to confront the US policy aimed at undermining the Palestinian capabilities to withstand the challenges and establish the independent and sovereign Palestinian state within the 1967 borders with East Jerusalem as its capital.

The two ministers agreed to hold further talks to develop these ideas.

They also discussed ways to strengthen and develop bilateral relations. In this regard, Malki called for holding a second meeting for the Palestinian-Turkish joint ministerial committee after overcoming of the Corona pandemic. They also discussed holding and activating political consultations between their two ministries.

For his part, Cavusoglu affirmed his country's rejection of the Israeli annexation plan and its stand by the State of Palestine in foiling this plan, as well as its readiness to continue providing all forms of assistance to Palestine in various fields and to provide all possible assistance to make the upcoming Palestinian elections successful.