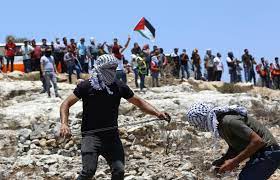 Israeli forces used fatal violence to disperse a rally in protest of the construction of the new colonial settlement of Givat Eviatar atop Jabal Sabih (Sabih Mountain), near Beita in addition to another rally to defend Palestinian-owned land threatened with confiscation, east of Beit Dajan.

Palestine Red Crescent (PRC) medics said that one protestor was hit by live ammunition in the foot and five others suffocated from tear gas in Beita. All casualties were treated at the scene.

They added that another protestor sustained wounds from a rubber-coated steel bullet, another sustained burns after being directly hit by a gas canister in addition to 37 others who suffocated from tear gas in Beit Dajan.

Local sources said that six people, including a journalist, sustained rubber-coated steel bullet injuries and other suffocated from tear gas.

Palestinians across Historic Palestine have been rising up against decades of Israeli settler- colonialism and apartheid. The villagers of Beita have not only been protesting decades of Israeli oppression, but also intensified Israeli land pillage of their land.

In addition to Mount Sabih, Israeli forces have erected another colonial settlement outpost atop Mount Al-Arma, north of Beita, a few months ago, as both mounts enjoy a strategic location as they overlook the Jordan Valley, a fertile strip of land running west along the Jordan River which makes up approximately 30% of the West Bank.