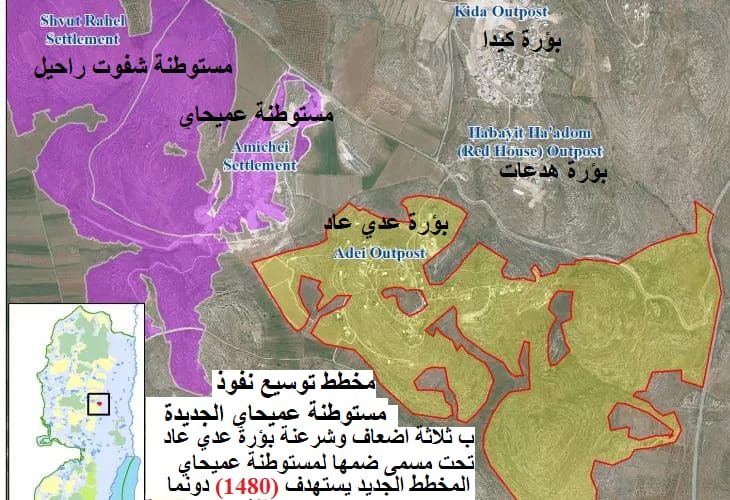 Map showing the West Bank land that will be appropriated to expand illegal settlements.

RAMALLAH, Wednesday, July 13, 2022 (WAFA) – The Israeli occupation authorities have embarked on one of the biggest land heists north of Ramallah in the occupied West Bank to expand illegal settlements in the area, according to a local official.

Ghassan Daghlas, an official who monitors colonial settlement activities in the northern West Bank, told WAFA that Israeli forces seized more than 1,480 dunums of land around the colonial settlement of Shilo that belong to the villages of Qaruyout, Jalud, Turmusayya and al-Mughayyir, all located between the West Bank cities of Ramallah and Nablus.

He pointed out that this step is the largest land grab intended to expand the colonial settlements and outposts that surround the villages and came as per a military order, which the Israeli occupation authorities issued on April 14 but did not disclose until after the deadline for objections to the order has expired at the end of May.

He added that Palestinian landowners have been denied access to their lands slated for expropriation as a prelude to expanding the colonial settlement of Amichai three times its current size and to legalize the colonial outpost of Adi Ad and annex it to the former settlement.