PM Shtayyeh to members of the US congress: Situation in Palestinian territories may lead to explosion 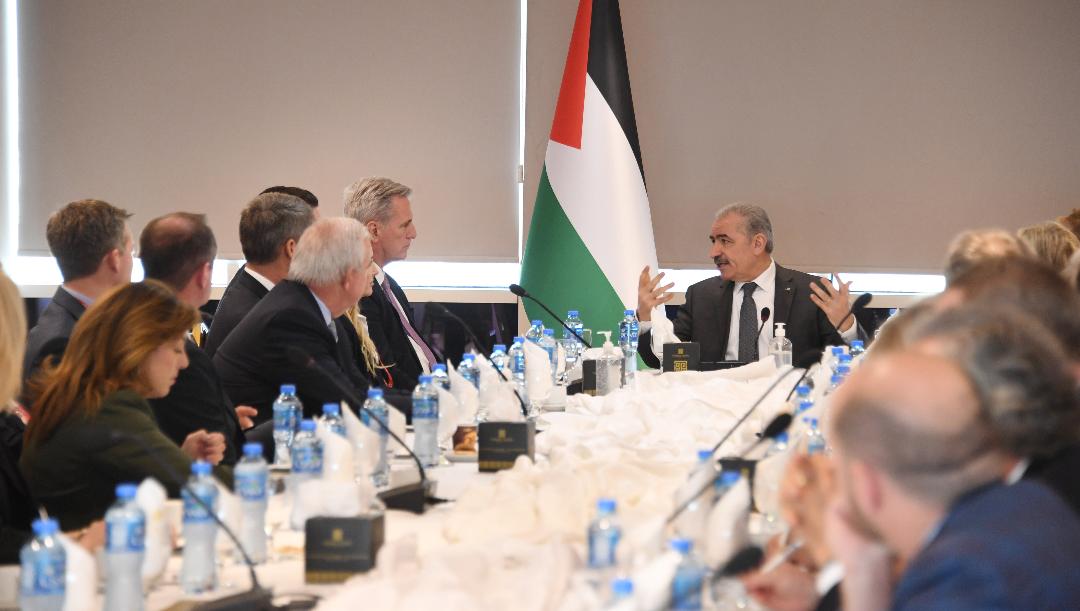 RAMALLAH, Monday, February 21, 2022 (WAFA) – Prime Minister Mohammed Shtayyeh said that there is a dangerous political vacuum that may result in the explosion of the situation in the Palestinian territories, stressing that Israel is an expansionist state that bears political responsibility for its actions against the Palestinian people.

This came during a meeting in Ramallah with a delegation of the US Congress consisting of 30 members of the Republican Party headed by Kevin McCarthy.

"Israel does not want the two-state solution or the one-state solution, and all it wants is the continuation of the fait accompli, which is a deteriorating reality that will lead to an explosion of the situation," he said.

He stressed that the US administration can compel Israel to stop its aggression against the Palestinian people if it wants to.

Shtayyeh called for the formation of a committee from the US Congress to investigate the practices of persecution and apartheid carried out by Israel against the Palestinian people, which have been documented in many international reports, such as the recent reports of Amnesty International and Human Rights Watch.

He also called on the US administration to abide by its commitments to the Palestinians, foremost of which is the reopening of the US Consulate in Jerusalem, in addition to reviewing all laws and legislations taken towards the Palestinian Liberation Organization (PLO) and the National Authority as a partner for peace.

The prime minister explained that the completion of the municipal elections is a step towards general elections once Israel agrees to hold them in Jerusalem, calling on the United States to pressure Israel to abide by the signed agreements, including allowing the elections to be held in Jerusalem.

He briefed the delegation on the provisions of the unjust Israeli deductions from the Palestinian tax funds, calling for pressure on Israel to stop these deductions and to allow auditing and monitoring of the deductions clauses.

"The real enemy of peace is settlements, and today we see an unprecedented settlement acceleration," Shtayyeh said. "We want to end the occupation and establish our independent and geographically contiguous state,” stressing that the implementation of the two-state solution is a victory for all parties.