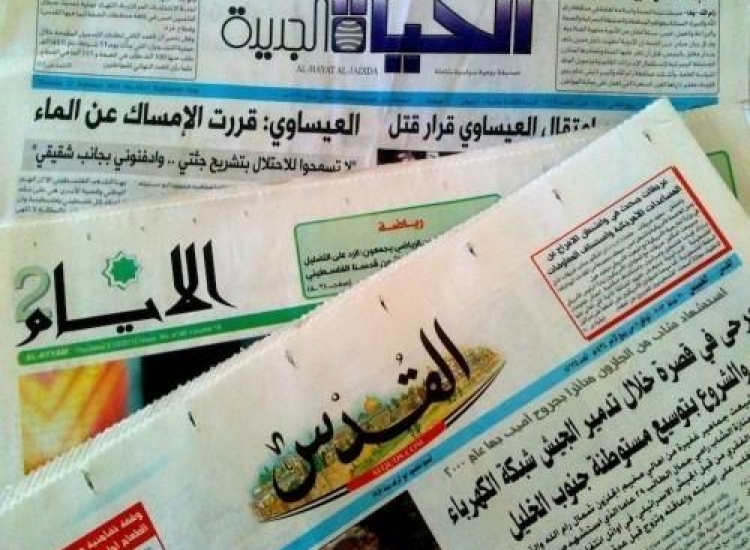 RAMALLAH, Friday, January 28, 2022 (WAFA) – The snowstorm, even though light, that hit Palestine and the region yesterday leaving a white blanket and its aftermath were highlighted on the front page of the three Palestinian Arabic dailies published today.

"Palestine's highlands covered in white and thousands of people enjoy the snow," said the main front-page story headline in al-Quds daily, which printed a picture showing the Dome of the Rock in Al-Aqsa Mosque in Jerusalem and the snow-covered platform where people were enjoying the snow.

The third daily, al-Hayat al-Jadida, also reported on the weather conditions and said that Israeli police detained two dozen Palestinian youths while playing in the snow in Jerusalem.

In another topic, the newspaper quoted the Palestinian Foreign Ministry saying that Israel's incitement against the UN investigation committee is an attempt to hide its crimes.

Al-Quds said Israel seeks to expand Hadassah Mount Scopus Hospital in Jerusalem at the expense of the nearby Palestinian neighborhood of Isawiyya, and al-Ayyam said the expansion is going to increase the hospital's area by five times.

It said in a report that the financial situation of the Palestinian Authority is very difficult.

The paper also quoted Israeli Prime Minister Naftali Bennet saying that he will not meet President Mahmoud Abbas who is going after Israeli soldiers in the International Criminal Court at The Hague.

Al-Ayyam also said Bennet said he is against a Palestinian state.

The three dailies also reported on the Covid-19 pandemic in Palestine, the region, and the world.