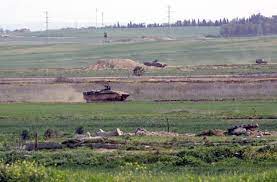 He said that the several Israeli military tanks and bulldozers advanced several dozens of meters to the east of the town, and razed a strawberry-planted field belonging to a local farmer, inflicting heavy losses on him.