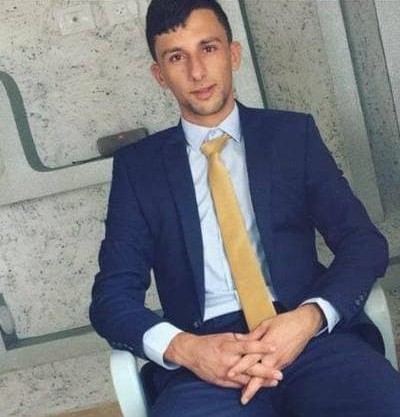 JENIN, Wednesday, December 22, 2021 (WAFA) – A Palestinian who was last night burnt to death in his car after he was shot at by Israeli soldiers near a military checkpoint in the north of the West Bank was identified as Hikmat Abdul Aziz Mousa, 22, from the village of Marka in the Jenin district, according to local sources.

The Palestinian Ministry of Health confirmed his death but did not identify him, saying in a statement that it received confirmation of his death from the Palestinian liaison office with Israel.

Mousa perished in his car after it caught on fire, said the local sources, adding that Israeli soldiers manning the checkpoint known as Dottan, near the town of Yabad, opened fire at his car alleging he was trying to carry out a car-ramming attack.

It was not clear how the car caught on fire, but it burnt near an army watchtower and near an Israeli military jeep, which was also burnt.

Following news of the death of Mousa, Marka residents marched to his family home in a show of solidarity with the family.

The army refused to turn over the charred body of Mousa to his family for burial and decided to hold on to it, possibly to use it, like other bodies of Palestinians its forces have killed and withheld, as a bargaining chip in future prisoners exchange negotiations.