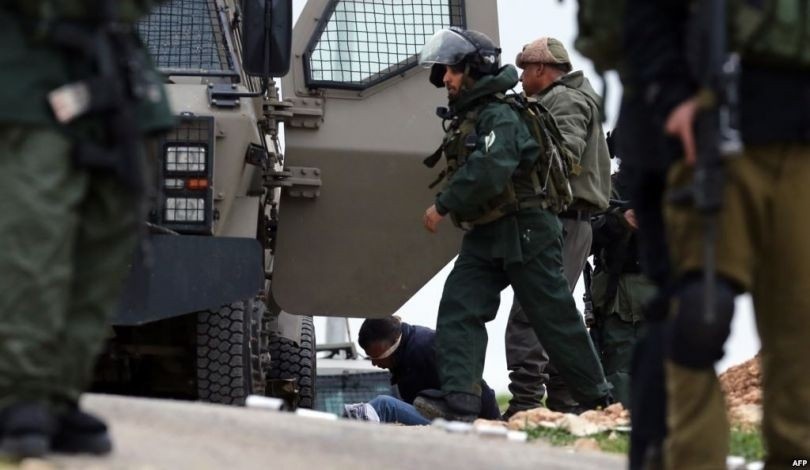 A Palestinian sit blindfolded on the ground after being detained by Israeli soldiers in a West Bank raid.

They said that Israeli forces barged their way into Deir Abu Masha'al village, northwest of Ramallah, where they rounded up three Palestinians, including an injured young man, after breaking into their houses.

They also rounded up a 16-year-old teen and forcibly entered several houses in the nearby village of Deir Nidham, which has been under blockade and a target of frequent raids and assaults for over two weeks.

The soldiers have erected barriers at the village entrances, stopping vehicles and thoroughly inspecting passengers.

The sources added that another was detained from his house in Kafr Ni'ma town, west of the city. The detainee was identified as a student enrolled in Birzeit University (BU).

In Jerusalem district, Israeli police rounded up two others; a BU student from Wadi al-Joz neighborhood and young man from al-Issawiya neighborhood.

Heavily-armed police and intelligence officers barged their way into Sur Baher neighborhood, where they showed up at the houses of the families of at least three prisoners, went inside and searched them, turning them upside down.

They handed them military orders to seize funds purportedly received from “hostile entities” –in reference to the Palestinian Authority or factions—as reported by the Wadi Hilweh Information Center.

They also raided in al-Walaja village, west of the southern West Bank city, resulting in the detention of another.

The sources added that a similar raid was carried out in Marah Rabah village, south of the city, where the soldiers forcibly entered and searched the houses of three brothers, turning them topsy-turvy. No detentions were reported though.

In Hebron district, the soldiers forced their way into Sa‘ir town, east of the city, where they rounded up two others.

They also detained three others; two of them were identified as residents of Ash-Shuyukh and Tarqumiyah towns, northeast and northwest of the city.

In the northern West Bank, the soldiers showed up at a house in Kafr 'Abbush town, southeast of Tulkarm, where they detained another.

They conducted predawn raids in Tulkarm city as well as in Far‘un and Kafr al-Labad towns, northwest and east of the city, resulting in the detention of three others.

In Nablus district, another was detained as Israeli troops targeted the villagers of al-Lubban Ash-Sharqiya, south of the city, who fended off a settler attack against a local school, as confirmed by Ghassan Daghlas, who monitors Israeli colonial settlement activities in the northern West Bank.