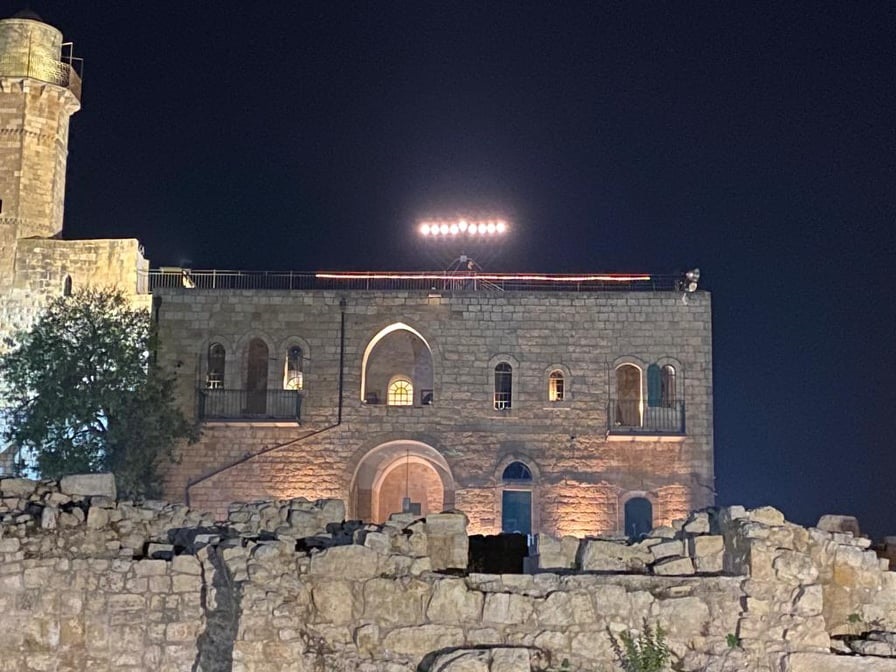 JERUSALEM, Thursday, November 25, 2021 (WAFA) – Israeli settlers today erected a huge menorah on the roof of a historical mosque in the village of Nabi Samwil, northwest of Jerusalem.

Anas Obeid, a resident of the village, told WAFA that settlers, accompanied by staff of settlement organizations, set up a huge menorah on the village mosque purportedly to celebrate the Jewish feast Hanukkah.

The Undersecretary of the Ministry of Awqaf and Religious Affairs, Hussam Abu al-Rub, condemned the settler move as an “infringement upon the sanctity” of the site as he stressed his rejection of any Israeli interference in the affairs of Islamic holy sites across Palestine.

He explained that the occupation authorities aim, through these measures, to appropriate the site and obliterate its Islamic features.

Nabi Samwel, also written as al-Nabi Samwil, overlooks occupied East Jerusalem on one side and Ramallah on the other. With approximately 300 people in no more than a dozen houses, the village is located in the “seam zone” — an area separated from the rest of the occupied West Bank by Israel’s apartheid wall, as reported by the online news website Electronic Intifada.

The residents of Nabi Samwil are flanked by colonial settlements, the wall and by an Israeli park that is encroaching onto their land.

The national park comprises an archaeological site, which includes the tomb of the Prophet Samuel, an important religious figure for Christians, Jews and Muslims alike. The tomb is surmounted by a mosque which Palestinians can only access on Fridays. It can be closed at any moment to let Israeli settlers access the tomb.

The inhabitants are considered West Bank residents and even though they are on Jerusalem’s side of the wall, they are only allowed to go to the nearest West Bank city, Ramallah, for necessary activities such as buying food or accessing medical care.

Required to submit to a tight regime of permits, everything in their lives is monitored: from the quantity of groceries they bring to the village to the people visiting. Each and every movement of people or products is being controlled by an Israeli “liaison office.”

Israel’s nation-state law that passed last July stated that building and strengthening the colonial settlements is a “national interest.”