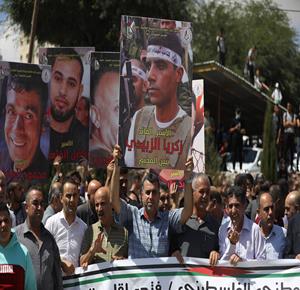 Palestinians rallying in Hebron in support of the prisoners. (WAFA Images / Mashhour Wehwah)

JERUSALEM, Tuesday, September 14, 2021 (WAFA) – The International Committee of the Red Cross (ICRC) said today that it expects to be able to visit the four recaptured Palestinian prisoners who broke out of jail last week and currently held in Israeli custody.

Spokesperson for the ICRC, Yahia Maswadeh, told WAFA that the ICRC was sparing no effort to visit the four Palestinian detainees who had escaped the highly-fortified Gilboa Prison last week and were recaptured several days later.

He pointed that all acts of torture and mistreatment against detainees, whether during detention or at places of detention, are prohibited under the international humanitarian law, while affirming that ICRC, which has been operating in the occupied Palestinian territories for over 50 years, is committed to visiting places of detention and ensuring humane treatment of all incarcerated persons in line with international law.

The Israel Prison Services (IPS) imposed severe restrictions against the Palestinian prisoners in a retaliatory manner after the outbreak of the six prisoners, which human rights groups termed a form of “collective punishment,” considered illegal in humanitarian law. The repressive measures led to mass protests which the Israeli forces attacked, leaving more than 100 Palestinians injured.

Two escapees were re-captured on Friday evening and two others on Saturday morning. Two remain at large.

Palestinians throughout the occupied territories held rallies today and over the past days at ICRC offices in the West Bank, but mainly in Ramallah, demanding the international organization to intervene to check on the status of the prisoners and to make sure the IPS does not mistreat them following several reports of raids and attacks against the prisoners and moving them around prisons in Israel.

Israel also said today that it will allow the family visits to the prisons starting Sunday after it suspended them following the breakout as part of the collective punishment policy.