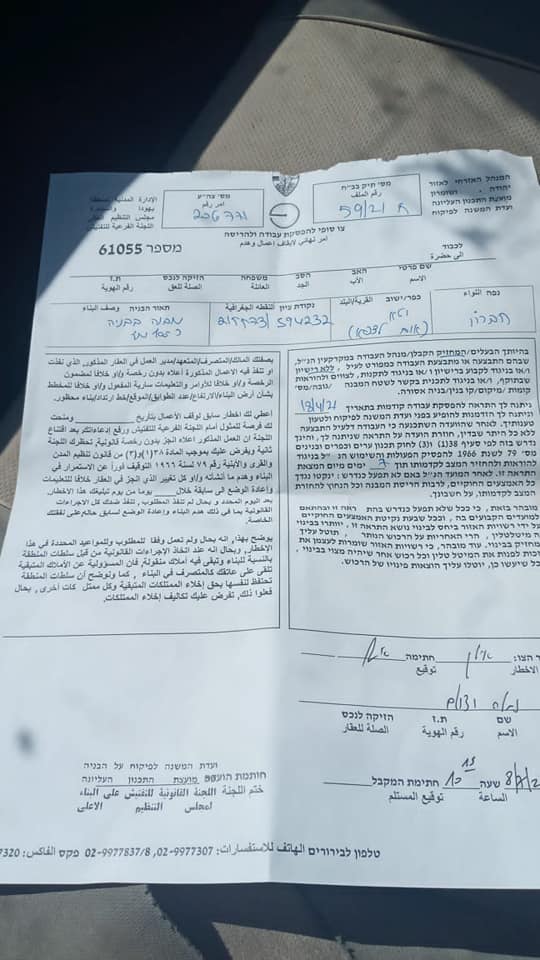 Demolition order to the graveyard.

Coordinator of the Protection and Steadfastness Committees, Fouad al-Amour, told WAFA that officers of the so-called Israeli Civil Administration handed an order for the demolition of the cemetery in al-Deirat village a week after ordering a halt on construction works at the site.

The Alliance for Human Rights, a group of activists who document human rights abuses in Palestine, confirmed that the demolition order against the cemetery was final.

It added that the officers confiscated two excavators that were working in an agricultural plot of land in the nearby village of al-Rifa'iyya village.

Located six kilometers to the east of Yatta, al-Deirat is a rural village that has a population of some 1,300 and occupies a total area of some 10,000 dunums; including 3,000 dunums classified as built-up area, 5,000 others as agricultural land and some 2,000 others as forests or open space.

The villagers depend on agriculture, livestock rearing and dairy production for their livelihood with 60 percent of the total population working in this sector.

The villager lacks health services, agricultural roads and infrastructure. Obtaining a master plan is essential for the village to protect the villagers’ houses against stop-construction and demolition orders.

Since the start of the Israeli occupation of the West Bank in 1967, like so many other villages in Palestine, al-Deirat has been subjected to almost continual land theft for Israeli settlements, bypass roads, and military installations.

The village is flanked by the Israeli colonial settlement of Karmel and that of Ma‘on from the east and south. It is also split by the settler-only bypass road.